Global poverty is not something recently invented for the benefit of multinational corporations.

Globalization has been wildly good for the world, in particular it’s been good for the poor.  It’s interesting because most Americans, 67%, believe that global poverty has increased over the last 40 years.  Fortunately for the world, this just isn’t true. 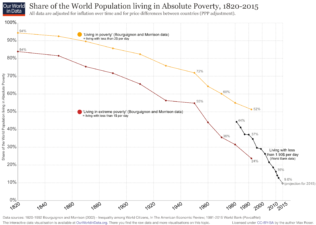 So what’s to blame for this?  Well, globalization.  Poverty decreases have been fastest where trade with the rest of the world is strongest.

In my view sweatshops are terrible soul crushing places, the faster the world is rid of them the better.

You would be very mistaken however, to think that sweatshops cause poverty.  Sweatshops are a symptom of poverty, and poverty will not be cured by removing the cause.  For example, one of the worst places to work is undoubtably in a Nike factory in Bangladesh. Unless you live in Bangladesh, there a job at a state owned factory pays only a third of what a Nike factory worker can make.  It’s easy in the west to simply say, “well that’s still unfair, it’s still too little. Nike should pay more”.  That’s easy for privileged westerners to say.  If Nike then moves out of Bangladesh and stops using sweatshops we will pay a little more for sneakers.

Take this example from Nicholas Kristof about the people in Cambodia who scavenge a garbage dump for recyclables:

Talk to these families in the dump, and a job in a sweatshop is a cherished dream, an escalator out of poverty, the kind of gauzy if probably unrealistic ambition that parents everywhere often have for their children.

Vath Sam Oeun, hopes her 10-year-old boy, scavenging beside her, grows up to get a factory job, partly because she has seen other children run over by garbage trucks. Her boy has never been to a doctor or a dentist, and last bathed when he was 2, so a sweatshop job by comparison would be far more pleasant and less dangerous.

Americans have a very selfish view of this, many would harm their country and others to end globalization and tear up trade agreements.  They’d prefer this sort of thing to continue instead of sweatshops because then they don’t have to feel morally responsible for it.  Refusing to help other people at your own expense isn’t nice, but it is normal behavior, and it is occasionally defensible.  Injuring yourself to do real harm to other people, and then pretending not to notice the harm you do is the most morally reprehensible thing I can think of.

This, in a nutshell, is why I think that buying local is just about the nuttiest thing I’ve ever heard of.  Paying more for a good, not because it’s quality is higher, but just because it happened to be made nearby impoverishes everyone, but the poor of the world most of all.  Putting the global poor out of work so that you can feel morally superior supporting someone with a college education making fancy doilies seems crazy to me.

But, buying local keeps the money in the community!

You have fallen prey to the money illusion.  The standard of living of a community is determined by what it produces not money that it has.  The problem with your reasoning is made obvious if you extrapolate it.  If a community is made better off by buying worse goods preferentially from each other, would the community be better off if everyone paid each other all of their money for spending all of their working hours producing the shoddiest good of all, nothing.  Your community would quickly starve.  Whenever someone is trying to convince you of their economic argument by paying attention to money rather than the actual goods and services, they do not understand economics.

If you think that your local producer of a good makes it better, that’s great, buy it.  If the goods that you buy local are equally good for the same price, then there’s no need for the inducement to buy it locally!  The degree to which the goods you purchase locally are worse, or overpriced (I generally find that a local good commands a 100% markup over its equivalent), is the degree to which you impoverish your community by buying them.

It’s very hard for Americans to understand real poverty.  Everything so much poorer than us looks equally wretched and miserable. The only important question in this debate is, what will most quickly bring global poverty to an end.  I’m sorry you don’t like that globalization and its attendant sweatshops are the only answer, but they have reduced poverty at a rate faster than has ever been seen in the history of man.  Many other things have been tried, including just giving people more money.  They don’t work.  Wishing won’t make it different.  Refusing to understand doesn’t improve the situation.  Sweatshops are dirty, miserable and dangerous, but they are their own cure.