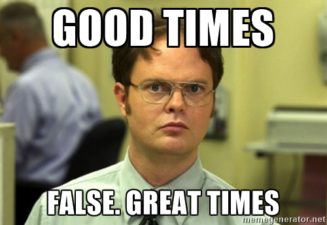 I thought that now would be as good a time as any to share my process for finding and investing in individual stocks.  I should first disclaim that most of my money is in index funds which won’t be touched by me for quite some time.  I’m still quite firm in my belief that the best returns are had by investing like a dead person.  That being said, I do invest other money, thinking that I can outperform the market by focusing in areas that professional investors have difficulty being effective in.  Therefore, I look for very illiquid stocks trading for less than $50 million.

Good Times (GTIM) fits at least this criteria.  If you live in Colorado it’s been a staple of fast food for quite some time.  The food quality has declined somewhat over the last 5 to 10 years, but that’s been true of nearly every other chain around here.  Maybe my tastes were simpler when I was a teenager, I don’t know.  I looked at the company as a possible investment four or five years ago and concluded that it was probably going to go out of business, so I passed. Turns out, I was wrong.

Good Times currently owns two restaurant concepts Good Times Burgers and Frozen Custard as well as Bad Daddy’s Burgers.  Good Times Restaurants owns and franchises 37 Good Times Burgers locations and owns 19 Bad Daddy’s Burgers locations.   Over the last year or two the company has basically been flat as far as earnings are concerned. While it might be tempting to look at the price of GTIM stock at this point, instead I suggest on attempting to come up with an independent valuation first.  I don’t know a ton about what makes a restaurant valuable, so it looks like its time to get at least a grounding in the subject.

How to Value a Restaurant

All businesses are only worth whatever cash owners can pull out of the business in the future, discounted to the present.  This applies whether your talking about restaurants, biotech, or railroads.  It seems to me that the first place we should start to get an idea of how much money the business will make in the future is to check out what management’s ideas for the company are, and see if it passes our initial shit-test.

According to management’s most recent conference call, 9 to 11 new Bad Daddy’s Burgers locations in 2017, three in Colorado and three in North Carolina.  To fund this expansion they plan on using a new $9 million debt facility along with $6 million of cash on hand.  In the first 9 months of the previous year (the most recently available data) the company had $3.6 million in cash flow.  So the question is, can these 9 to 11 restaurants open on roughly $19 million?  Between 2016 and 2015 they opened five Bad Daddy’s Burgers locations.  They also spent $7 million on property, plant and equipment investments.  For the purposes of our back of the envelope, we go ahead and estimate $1.4 million per restaurant.  Twice as many restaurants might be twice as much, or $14 million.  This is basically consistent with management’s guidance for paying $14.7 million for capital expenditures in fiscal 2017 (October 2016 to September 2017).  So management probably is being basically truthful about their upcoming plans, or at the very least the numbers aren’t insanely wrong, and it seems unlikely that the company will go bankrupt in the next year.  This is a very important thing to check!

The next step in my view, is to check what the value of the chain of restaurants as it is, would be worth.  I’m always nervous about paying for growth.  I’d prefer to pay a reasonable price for, you know, stuff that actually exists.  So, what is the expected gross profit from the 37 Good Times Burgers restaurants?  There isn’t a lot of growth happening here and the company breaks out the profits for that segment.  Based on the most recent quarterly report for Good Times along with the most recent annual report, I estimate that the 37 Good Times Burgers locations will generate about $570,000 in net profits annually.  I value this stream of profits at $5.7 million (applying a 10% discount rate).

The Bad Daddy’s Restaurants are somewhat more difficult to get a good picture of.  If we only look at the amount the restaurants are earning as they open we significantly underestimate the profits of the restaurants.  Unfortunately, this is also an important segment.  Measured in sales the Bad Daddy segment is much larger than Good Times.  Sales for the 10 restaurants that were open all year over the trailing twelve months was $26 million or $2.6 million per restaurant.  Management’s claim that the locations earn a 15% operating profit seems consistent with operating profit numbers from the company’s previous annual report.  I, therefore, estimate total sales of roughly $50 million from the Bad Daddy’s segment.  A 15% operating profit indicates $7.5 million in profits, we then need to remove the corporate tax, we’ll say roughly 35%, giving us just about $5 million.  I value this stream of profits at $50 million (again applying a 10% discount rate).

Last we have to subtract out the value of corporate expenses.  From the most recent quarterly report I estimate about $600,000 in ongoing corporate expenses. Discounted at 10% this works out to be a value of -$6 million.  Subtracting this from the Good Times Burgers locations and Bad Daddy’s Restaurants we get a total valuation of roughly $49 million for the entire company.

Worth more Dead or Alive?

The company’s balance sheet is $37 million.  I can’t seem to find any reason to believe that the real-estate Good Times holds is worth substantially more than it is being held on the books for.  This is about the only reason I can think of that the company’s assets, if liquidated, would be worth more than book value.  It’s entirely possible, given that much of their expansion took place over 10 years ago.  That might merit further study but as a first pass, I’m guessing that Good Times is better valued on its profits than its property.

Now we get to check our valuation against the valuation the market gives, or the market cap.  This is relatively straightforward as Good Times doesn’t have a very significant amount of debt. The current market cap of Good Times is about $39 million.  Our valuation indicates that Good Times could possibly be undervalued by 25%.  This isn’t a screaming bargain, but rather indicates that the company merits a further look.  It looks like Good Times is a misnamed company at this point, and the investment really comes down to whether the Bad Daddy Burger locations can achieve 15% operating profit and sustain $2.6 million in sales, the Good Times locations probably won’t make a massive difference in the value of the company, assuming nothing fantastically bad happens.

Given that I live in the area, I’ve opened a starter position and am headed to try Bad Daddy Burgers, we’ll see how it is.

I am long GTIM (Good Times Restaurants) I wrote this article myself, and it expresses my own opinions. This is not a investment recommendation. I am not receiving compensation for it (other than from the owner of the blog District Media Corp). I have no business relationship with any company whose stock is mentioned in this article.  Always do your own research before making any trade, buying or selling any stock mentioned.

Spread the love
By Adam Woods|December 9th, 2016|Categories: Blog|Comments Off on Good Times – How to Value Restaurant Stocks