I’m actually really surprised that I haven’t seen anyone point out this fact earlier. I was going to write this article weeks ago, but then just assumed someone else would jump on it. Unfortunately that hasn’t happened and I can’t ignore it any longer.

That’s what a new sales tax does, like the one he’s proposing in his 999 plan. Think about every dollar you have in your bank account, and then realize that if Herman Cain implements his 999 plan, you have to give the government 9% of all that saved money.

Well I guess that’s only if you spend that money. If you want to burn it or make paper airplanes out of it, then you don’t have to give them 9%. But I have a feeling most people expect to spend the money they earn. Or they expect their kids or grandkids to spend it. Eventually, it will get spent and it will be taxed 9%.

Haven’t We Been Taxed Enough Already? 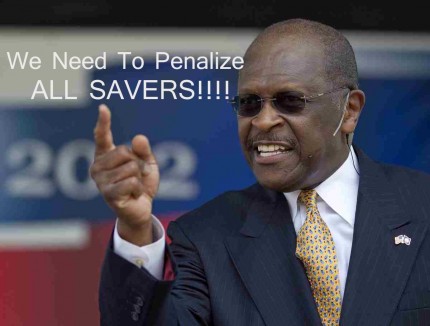 Now let’s compare me to my theoretical identical twin. He made the exact same amount as me and he was taxed at 22% in 2010. Except he wasted his money on booze and video games and parties. He didn’t save a penny. Well Herman Cain might shake this guy’s hand and say “Congratulations! You were irresponsible enough to spend every penny. We won’t tax you extra.”

Do you see how absurd this policy is? I don’t actually think the point is to penalize savers, but you can’t ignore the fact that it does.

If you want to implement a national sales tax, there should be a provision to ensure current assets are not taxed under both the old system and the new system. Herman Cain has no such provision. I actually find it quite humorous that his website claims:

It taxes everything once and nothing twice.

Implementing This Plan Would Cause a HUGE Market Imbalance

Imagine trying to implement the 999 tax plan. Let’s pretend the 9% sales tax goes into effect on May 1st, 2012. After this day, everything is going to be 9% more expensive because it will have a 9% federal tax on it.

Imagine how many people would go to the store on April 30th and buy as many things as possible to preempt the 9% price hike. Food. Electronics. Clothing. Maybe even Christmas presents. Buying something in April that you would have bought in the future is a guaranteed 9% return on your investment!

Now imagine the economic lull in that would start in May and last for who knows how long. People aren’t going to be buying anything because they spent all of April loading up on everything they need.

Herman Cain’s tax plan penalizes savers and it will create a huge temporary market imbalance. It is not a good plan for America, and it’s especially terrible for responsible people who have saved up a lot of money thinking it won’t be taxed again.

What do you think about Herman Cain’s Plan?