If I Had A Grilled Cheesus

I’m a Gleek. Luckily, I’m not in high school anymore so there’s no one to beat me up when I say I like singing and dancing.

Although you probably already knew I like that stuff based on this video. (I’m sitting at like 493 views right now. Help me get to 500!) Which reminds me, I’m sure all my loyal fans are on pins and needles waiting for my next music video that parodies Bruno Mars’ “Just The Way You Are“. I’ve said too much already, but I’ll give you one more nugget; the video should be released sometime next week.

I’m such a Gleek (fan of the TV show “Glee” which includes lots of singing and dancing in case your TV has been broken for the last 14 months) that some friends from work invited me to see Wall Street – Money Never Sleeps tonight, and I was planning on joining them until I realized it conflicted with Glee. Sorry friends, I have priorities and Glee is pretty much number one these days.

Side Note: As soon as I have a massive Thousandaire following (thank you current loyal readers), I will ask you all to join me in bombarding the Glee directors with letters and emails asking them to write a personal finance themed episode and use some of my parodies. If you think it would be totally rad seeing me and/or my PF parodies on Glee then start telling all your friends! 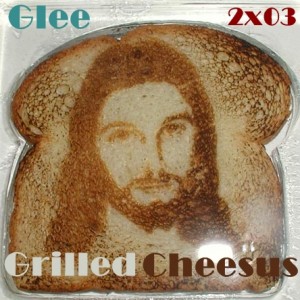 In this week’s episode of Glee, the dopey jock football player makes a grilled cheese that looks like Jesus. He begins to pray to this “Grilled Cheesus”, and the good cheesy lord grants all of his wishes. His crappy football team wins a game, he makes it to second base with his girlfriend (ow OWWWW) and he gets his job back as starting quarterback.

It got me thinking: if I had a Grilled Cheesus that would grant me a financial wish, what would I want?

After a lot of thought, I’ve come up with what I think is a pretty reasonable and achievable wish. I want Thousandaire.com to be profitable. I’ll probably explain all my website expenses in a full post at some point in the future, but I’ve spent well over $1,000 on getting this website up and creating content. That number is going to keep growing as I buy video editing software, purchase props for future videos, and incur other expenses. If my website were profitable, that would mean:

*This post was featured in the Carnival of Money Stories