Just When You Thought You Knew Something About Investing

Just When You Thought You Knew Something About Investing

You might remember my stock market experiment that I started in the beginning of the year. Basically I am pitting a bunch of amateur stock pickers and arbitrary groups of stocks against the S&P 500, investment experts, and a top mutual fund using my trading platform of choice.

The last update I did after 3 months showed the “Worst in 2011” running away with an incredible lead, while “Random” was in last place by a large margin.

Let’s see where we sit today after just about five months. 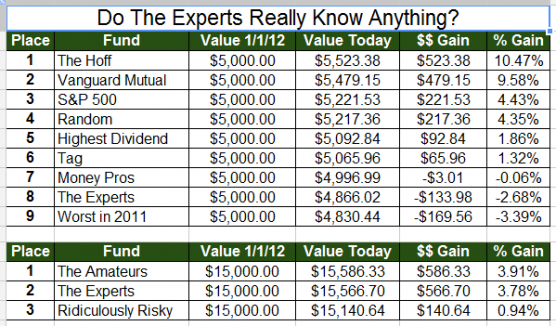 Oh How the Mighty Have Fallen

The Worst in 2011 was the top dog less than two months ago. Now they are in dead last. This is an exceptionally volatile group of stocks. The worst performer is First Solar (FSLR), which is down 60.31%, while the best performer is Sears (SHLD) which is up 64.69%.

In fact, 9 out of the 10 stocks are at least 14% away (either up or down) from where they started the year.

Lesson Learned: Picking the worst stocks from last year is extremely volatile and extremely risky. Also, if you have a 20% gain after three months, you may want to sell a bit and lock in some of that money!

How To Beat a Bear Market

The last two months have been pretty rough on investors, and it shows in this experiment. In fact, 8 of the 9 indexes I’m tracking lost value since our last check up.

But one actually increased in value: Random!

Thanks in large part to Willbros Group (WG), which is up 56.40% on the year, the Random collection of stocks went from dead last to a respectable 4th place. Right now it is just a fraction of a percent less than the S&P 500.

Lesson Learned: A slow start doesn’t take you out of the race. Who knows; Random might win this thing outright by the time December rolls around.

The Experts are Struggling

Have you ever considered paying some high priced, expensive hedge fund or broker a bunch of money to manage your investments? Well if you followed the recommendations of experts such as Josh Brown, advisor at Fusion Analytics (ARCO: down 34.00%) or Jim Jubak, financial columnist and money manager (STD: down 28.06%), you’d be in a lot of trouble.

The Expert picks I used for this experiment are currently sitting in 8th place. Yowza!

These people pretend like they are selling you information, but in reality they are just selling their opinion. They can’t tell the future any better than you can.

Lesson Learned: Just because someone is a “expert” doesn’t mean you should trust them with your money.

You Probably Know More Than You Think

You may have noticed The Hoff is in first place. In fact, he was less than 2% out of first place the last time we checked. He has the most successful group of stocks so far, and he picked them because he knew them and they made sense to him.

If you remember from his 12 Stock Picks for 2012 article, he picked stocks like Bed Bath and Beyond (BBBY: up 26.10%) because he likes the store so much he is registering there for his wedding.

Think about a company where you spend your money. A company you are very loyal to because they have a quality product at reasonable prices. There’s a good chance that company is doing well in the stock market for the same reasons it is doing well in your opinion.

Lesson Learned: There is more to investing than financial statements. How a company does business is just as important.