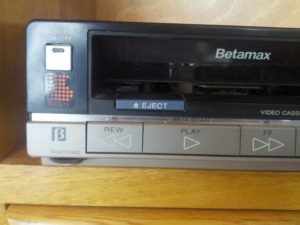 Your chance to invest in a failing physical media format. Thanks to hcalderonmeister

Outerwall (OUTR) is a company you probably haven’t heard of but have probably made use of at least once.  Formerly known as Redbox the company changed its name to Outerwall in hopes of not being so closely connected with an obviously dying medium.  You should be aware that DVD rentals probably aren’t going to exist in 10 years, and the vast majority of Outerwall’s sales are generated by DVD rentals.

Outerwall’s business consists of two divisions, Redbox and Coinstar.  Redbox operates the eponymous automated DVD rental kiosks in McDonald’s and grocery stores throughout the United States.  Coinstar operates automated coin changing machines.  Both lines of business seem destined to dissappear within the next couple decades, though I admit I can’t see Blu-Ray’s lasting even that long.  Roughly 80% of sales are produced by Redbox.

An optimistic valuation in my view is that Coinstar revenue is basically flat for eternity and Redbox’s revenue disappears smoothly over the next five years or so.  If we assume that corporate costs stay the same for eternity (obviously this isn’t true but they could go either way, so that’s why we’re using an estimate), we can combine the corporate costs and Coinstar’s net income to come up with an annuity of roughly $26 million.  If we discount this annuity at 10% (chosen as a rule of thumb, be careful about this, it could have substantial changes to the current value). This gives Coinstar a value of $260 million. We then add in the value of the cash which can be extracted from Redbox before it’s inevitable demise.

I assume that the depreciation, direct operating costs, and marketing costs shrink along with revenue, I figure that other costs stay stable.  I discount this these values at 10% annually as well. Based on these assumptions, I figure that Redbox is worth $475 million if management absolutely nails the moment to quit.  Together, this makes me figure that the business is worth $735 million (roughly $45.35 per share) in total.  Current valuation of the business is $835 million.

Apollo Funds has offered to buy the entire company, for $52 per share.  They have made a tender offer which expires at the beginning of September and if you participate in the tender offer (by instructing your broker to tender your shares) you will probably also get paid within a few weeks of September 1st.  At that point Apollo will use its newfound voting power to buy the remaining shares at the same price $52 per share.  In order for the deal to go through more than half of the shares need to get tendered to Apollo in the tender period.

Given that Outerwall currently trades for just about $52 ($51.86 as of this writing) a share you might be wondering why in the world you’d be willing to buy it only to get a microscopic gain come September. As it turns out that’s a little bit of a trick.  If you purchase the stock on or before August 19th you will also get a $0.60 dividend. Therefore should the company get bought out you’ll get your $0.14 and a $0.60 dividend.  This will be a 1.5% gain over the course of a little less than a month.  Annualized that works out to 18%, a respectable return by any measure.  However, you have to weigh that against the downside that the deal might break and you’ll be left with your Outerwall shares which I consider to be worth about $45, so this break would represent a downside of 13%.  In order for this to have positive expected value you’ve got to be thinking that the chances that this deal goes through are about 10x the chances that it breaks.

Additionally, there has been a bevy of legal interest and at least one lawsuit filed on behalf of the shareholders questioning the deal price.  There is a small chance that either Apollo Funds raises the buyout price or another buyer comes in with a better price. Without this possible upside Outerwall at this price probably isn’t worth the risk.  This is probably no more than a 5% scenario, but the additional possible buck or two adds a significant amount to the expected value that you shouldn’t ignore.

The real opportunity is that the deal breaks.  If that happens the price will probably fall substantially as everyone heads for the door at once.  This would be an opportunity to make some easy money if the price falls far below intrinsic value.  I own shares of Outerwall, and am not adding in order to pick up the possible 1.5% gain (which given the tight time period probably doesn’t need to get scoffed at).  But I will probably add to the position by buying either their bonds or stock depending on which gets knocked more out of whack.  Outerwall is obviously going largely out of business in the future, but someone is going to extract a great deal of money from it between now and then.

Disclaimer: I am long OUTR (This means that I own Outerwall stock, or that I profit when the stock goes up.  Short would mean that I profit if the stock goes down.). I have no plans to buy or sell any of the mentioned stocks within then next 72 hours. I wrote this article myself, and it expresses my own opinions. This is not a recommendation to buy or sell any stock. I am not receiving compensation for it (other than from the owner of the blog District Media Corp). I have no business relationship with any company whose stock is mentioned in this article.  Always do your own research before making any trade, buying or selling any stock mentioned.