Owning a Home Can Be Very Painful

After this weekend, I don’t think I ever want to own a home.

My girlfriend Tag asked me to help her family move some dirt so they could expand their driveway. I was planning to record my next personal finance song this weekend, but had a little bit of a stuffy nose and couldn’t really sing, so I decided to help her out. I mean, how bad could it be?

I spent the day swinging a pickaxe to cut through ginormous roots buried in the dirt and smashing concrete with a sledgehammer. I also spent time shoveling and wheelbarrowing the dirt to other places in the yard. 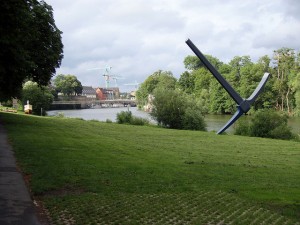 A huge pickaxe, courtesy of: flickr.com/daquellamanera/

Four of us worked for about six hours and didn’t get half of the work done. And once the other half of the work is done, Tag’s dad is going to need to rent a stump grinder to completely remove two massive stumps out of this area. Oh, and did I mention the only reason they were stumps and not actual trees was because Tag’s dad and sister spent a few weekends cutting down two huge trees that were growing right up into power lines?

The amount of time spent on the seemingly simple process of cutting down trees and moving dirt is unreal. The amount of money that will be spent on tools and supplies to do all this work and eventually fill in the space and extend the driveway will certainly be enough to pay for a very nice vacation.

Oh, and I should mention that I’m literally having trouble typing this blog because the muscles in my hands are so sore from swinging heavy tools for six hours.

All that time, money, and energy can be saved by one simple thing: renting.

Renting is So Much Easier!

I’m not saying people shouldn’t own homes. I’m saying I don’t want to own a home.

The amount of responsibility that comes with owning a home seems oppressive, and that’s without even considering big yard projects like the one going on at Tag’s parent’s house. Right now I have weekends free to do whatever I want. With a home, I would have to spend time and/or money mowing the lawn, trimming the bushes, fixing things that break, renovation projects, and more.

I’ll put it this way: have you ever thought you might want to have kids, but then you spend a few hours with someone else’s bratty, unclean child and swear off kids forever? This weekend, Tag’s house was the equivalent of a child who screamed at me, stomped on my toes, punched me in the balls, and then sneezed in my mouth.

I won’t be a home owner for a long time.