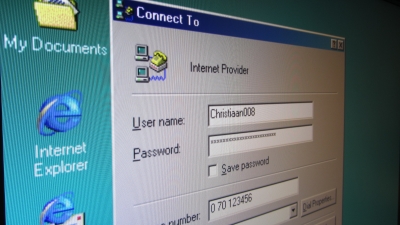 Outside of index funds in my 401k I do most of my investing in small microcaps. I’d like to profile one of them today. It’s got a little bit of an interesting story to it, and might be one of the strangest stocks I’ve seen. So strap in.

A word of warning

This stock is traded over-the-counter. It trades for a few cents. It is extremely illiquid. Your BS alarms should be running really loudly right now. This is exactly the type of stock people would use in a pump and dump scam. It is missing one important component for a pump and dump scam however, it just isn’t exciting.

What does Sitestar (OTCBB: SYTE) do?

Basically the idea is that you have a phone for your home, called a land-line. It’s one line for the whole family, though often there are a few phone in the house that connect to this one line. The idea of dial up internet is that you can use this land-line to send data instead of your voice. Unfortunately, because of the way this works only one computer in the house can connect to the internet at a time. Also, if someone is connected to the internet no one can use the phone.

So turns out people actually still pay for this, $10 to $20 per month in fact. At this point Sitestar isn’t expanding their dial up service. They just collect a toll on their existing network.

So why do we care?  This is a dial-up company. Might as well invest in a buggy-whip business. Obviously the dial-up portion of the business will eventually be with zero. Why would you invest in a company that’s gonna be worth zero?

Well there is only one reason you invest in a company that’s going to be worth zero, you think that you will get more money out of the company than you paid for it, before it goes to zero.  An example of this might be Outerwall (OUTR), they are the owners of Redbox (the dvd rental kiosks).  Obviously in 2025 (maybe earlier!) Redbox will be worth zero.  Investors are now betting that they will get more in dividends from Outerwall than they paid for the stock before it is worth zero.

Well, Sitestar has never paid a dividend.  That’s odd considering that between 2008 and 2014 they took in about 9 million in cash while spending only about 2 million reinvesting in the dial up business.

So where did the rest of the money go?

Real estate, you ask?  Yes!  During the great recession the CEO Frank Erhartic went on a buying spree, snapping up residential properties that had become substantially discounted due to the bursting of the housing bubble.

So what’s it worth?

Well, the company has about 3.7 million in real estate, and virtually no liabilities to speak of.  (Well, there is about a million dollar debt the company has to a former employee that the company contends is not actually owed.  It should be eliminated from the books at some point in the future.) That real-estate is held at cost.  I figure the company has to be worth at least that much.  So, what’s a single share worth?  Well, 3.7 million divided by 74 million shares outstanding works out to be 5 cents per share. Sitestar last traded at 5.86 cents per share.  (Don’t get that confused with $5.86.)  Since January Sitestar has traded between 5 cents per share and 6 cents per share.  Sitestar still makes some money from its dial-up operations and these are probably worth another hay-penny to penny per share (I’m just so excited I finally got to use hay-penny in a sentence.) I am a buyer between 4.5 cents and 5 cents.

It’s important to understand that Sitestar is extremely illiquid. What does it mean when a stock is illiquid? In this case, it means most days $SYTE doesn’t trade.  It means, that if you put in a market order for Sitestar it might not get filled, or worse it might get filled at a ridiculous price.

Well, up until recently I thought, basically Sitestar was going to be somewhat more than the carrying value of the real-estate and if you wanted exposure to some real estate on the east coast, this seemed like a cheap way of getting it.  Naturally, the situation has changed a bunch in the last year or so and tomorrow we’ll go over what these changes are and what difference they make to the stock.

I have no positions in any stocks mentioned, but may initiate a long position in SYTE over the next 72 hours. I have open limit orders between 4 and 5 cents per share. I wrote this article myself, and it expresses my own opinions. This is not a investment recommendation. I am not receiving compensation for it (other than from the owner of the blog District Media Corp). I have no business relationship with any company whose stock is mentioned in this article.  Always do your own research before making any trade, buying or selling any stock mentioned.