The Kardashian Card Fights Drug Use?

In what has to be the most ridiculous financial news story in recent memory, Kim Kardashian has partnered with Mastercard to create a prepaid credit card for children.

The card itself isn’t ridiculous; it’s actually a nice concept and I’m thrilled we have a celebrity sponsoring a product that promotes responsible personal finance. People listen to Kim Kardashian because she is famous, and she’s using her fame to get parents to open a secured credit card for their kids (which is essentially no different than opening a checking account for a kid and getting a debit card with that account). The financial instrument isn’t a new concept; a famous person promoting the product is what makes this exciting.

And then there’s the secondary motive that kills me. Kim isn’t just trying to keep parents informed on their children’s spending and teach kids to use financial products at an early age (not to mention pocketing a few buckaroos for her sponsorship). Nope, she’s fighting a much larger battle.

I can’t make this stuff up. Here’s a quote from a Mobile Resource representative:

“Teens do not spend their money as their parents think they do. And, drugs are a huge problem in this country. I give my son a small amount of cash and track his spending on his card.”

Let’s play a little game called, “Which one of these sentences does not belong?” It’s easy; all you have to do is look at the quote above and decide which one of those three sentences has absolutely nothing to do with the other two (hint: it’s the bolded one).

For this card to effectively curb drug use, it demands all of the following:

Does anyone really believe a kid who wants to do drugs will give up because their parents don’t give them cash? Let’s be realistic here folks. Can you imagine a crackhead just sitting around being bummed out because he wants drugs and all he has is this stupid credit card? Tyrone Biggums does not approve. 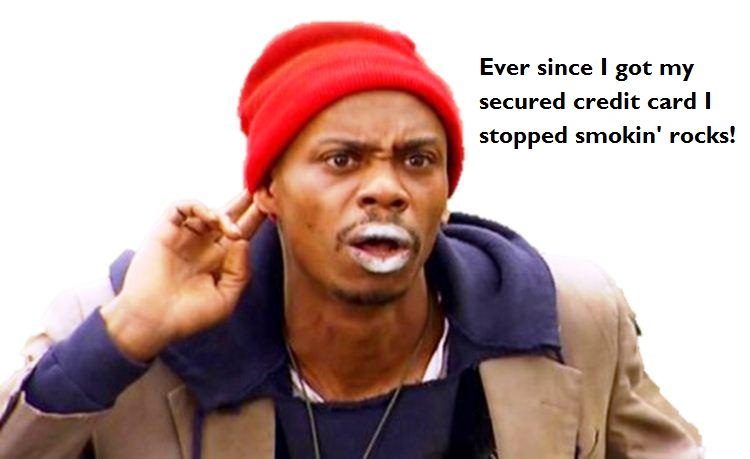 Don’t get me wrong; I definitely support any efforts to curb child drug use. It’s just so frustrating that they have taken this secured credit card idea, which has potential to do a great job of teaching kids practical financial skills while keeping parents involved in their kid’s financial decisions, and given it an unrealistic and unmeasurable goal of fighting drug use.

I can’t wait for her next project when she hands out food at a soup kitchen that also magically cures Juvenile Diabetes.