Used Appliances are The Best!

I have one word on how to get cheap appliances, specifically your washer and dryer set. Craigslist.

I purchased my current washer and dryer set for $28.33. I was living with two roommates and we bought our set off Craigslist from a couple who bought new appliances and just wanted to get rid of the old one. The total cost was $85, split between the three of us.

When the roommates moved out (side note: one of the roommates was The Hoff), the washer and dryer stayed with me. And despite a little bit of leaking every now and then from the washer, I’ve had a perfectly good washer/dryer set for almost 4 years.

But as the saying goes, all good things must come to an end. Last night I did a load of laundry (actually Tag did it) and by the end of the first rinse cycle I basically had to swim through all the leaked water to get back into the laundry room. My washer was leaking about a gallon of water per load.

At this point I had a few options

If you know me at all, you know what I did.

Trying to Fix My Washer

So after a few Google Searches and YouTube videos, I at least figured out how to take the washer apart. 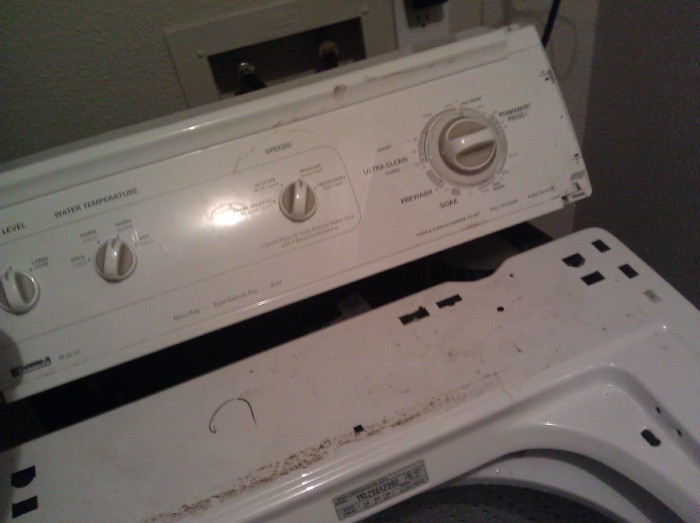 Now I just had to figure out where the water was leaking from and then figure out a way to fix it. I’ll spare you the details, but I think I figured out the problem and at the same time broke something which may have actually fixed the problem.

I did a load this morning and there wasn’t a drop of water on the floor. BOOYAH!

Why I Love Used Appliances