Whatever Wednesday: Goals and Weekend Update

This week’s Whatever Wednesday submissions were pretty light. I’m thinking it’s because of the holidays. Or maybe it’s because I didn’t beg this week like I usually do. Just remember, I’ll write about anything you want me to as long as you tell me what to do on twitter or facebook Tuesday nights.

Let’s get started with the first of two suggestions this week.

I have to believe that Jana’s question was prompted by this video:

I don’t always watch Saturday Night Live Weekend Update. But when I do, I prefer Tina Fey and Jimmy Fallon.

Why? Amy Poehler is not even remotely believable as a news anchor and Seth Meyers just isn’t all that funny. Tina Fey has a special place in my heart for being ridiculously hilarious, and Jimmy Fallon has the perfect demeanor of “I think he could be serious… oh, nope, that was hilarious.”

With that being said, I grew up on Colin Quinn as my Weekend Updater and he’s still the best in my book.

I love goals. Here’s my favorite one: 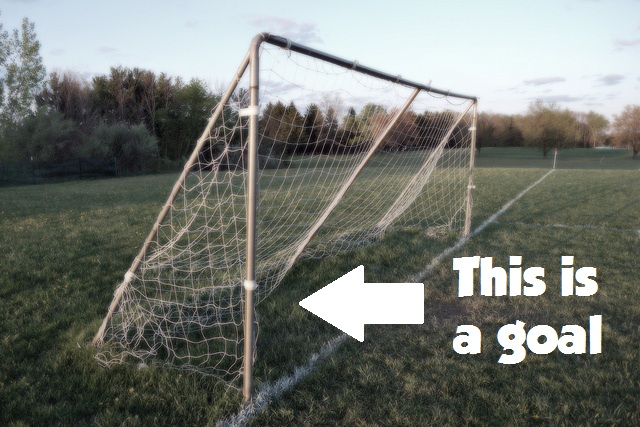 I also like setting goals. I think it’s important to drive towards something. In fact, I think the setting of goals is much more important than reaching them.

For example, I made a goal a few months back to do one music video every month. After I made that goal, I put out my first full length music video in almost a year.

Have I lived up to the once per month objective? No. But have I done better? Absolutely. And doing better is thanks to setting that goal.

Here are a few of the goals I set in 2011 and how well I did against them:

I didn’t meet all my goals, but I did alright. To be honest, I didn’t do a great job of setting goals at the beginning of the year though. That’s gonna change next year.

The new year is coming up and it’s time to start setting goals. I don’t like “New Year’s Resolutions” because no one ever does those. I prefer calling them goals.

I don’t have a complete list ready yet, but here’s what I have so far: