I was frugal in college. Okay, I was downright cheap. I couldn’t help it; I believe it is written somewhere deep inside my DNA.

When I was looking for a place to live during my junior year in college, my master plan was to cram three people into a two bedroom apartment for $540 a month. And if that’s not cheap enough for you, me and another guy shared the smaller bedroom and gave the bigger one to one guy because he was willing to pay more rent. 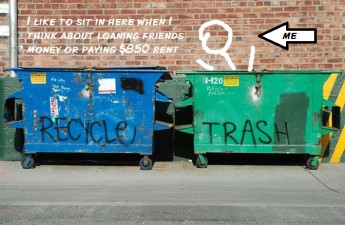 I don’t remember exactly, but I think my rent was about $150 a month. It’s one of my most proud personal finance moments. Actually, thinking back to those days kinda makes me feel like a piece of garbage for paying 500% more for rent today.

Anyway, I signed the lease and was essentially on the hook for the whole $540 a month. It was my job to collect rent from my roommates. Well the guy who lived in my room usually paid on time, but the guy who was living in the master bedroom, who was (and still is) my best friend, had some trouble. He was trying to work full time at a job 45 minutes away and go to school full time and pay for all the transportation costs entailed in that situation. Let’s just say there was consistently too much month left at the end of his money.

He made a few rent payments to me, but I essentially paid most of his rent for the duration of the lease and he ended up owing me around $2,000. I was a poor college kid so I constantly asked him when he was going to pay me, and he was always told me his plans to pay me on his next paycheck, or when a student loan came in, or something else.

In the meantime, I was living with him. Every day I would see his daily financial decisions. Anytime he bought a new video game or went out to eat, I couldn’t help but think, “He could have just given that money to me.” It literally started to drive me crazy. He was too good of a friend to let the money come between us, but it was also too much money to forgive the loan. I was being torn between my best friend and money, and I hated every minute of it.

His owing me money was an annoying situation between us for a long time. He paid me some here and there when he had the chance, but a few years later he still owed me something less than half of the $2,000. (the computer where I was tracking the loan crashed, so neither of us knows exactly how much he owes me). Years later it was still putting a small strain on our relationship. Money issues are one of the most common reasons for losing a best friend, which is why you should always try to avoid situations that put you in a financial strain with your friends.

I Love Getting Advice from Smart People

Then I started my first job out of college and began to work for an incredible man. My boss and I were out to lunch one day, and somehow we got on the topic of lending money to friends and family. He told me a story about a time he lent money to a friend who took a long time to pay him back, and then he gave me one of the best pieces of advice I’ve ever received.

“A loan to a friend or family member isn’t a loan; it’s a gift. Don’t think about it, don’t ask them about it, and don’t worry about it. If they ever pay you back, great. If they don’t, oh well.” 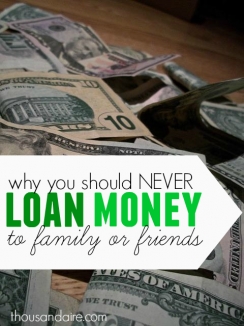 I adopted this philosophy and my relationship with my friend instantly got better that day.

To clarify, this is just an internal mindset. The loan is still a loan. The friend or family member is still expected to pay you back. But if you internally look at the loan as a gift, then you can maintain a healthy relationship with that person while the loan remains outstanding.

Once I decided to look at the loan as a gift, I didn’t worry about where he was spending his money or how much he owed me; I was just happy to have a great friend in my life. I realized his friendship is definitely worth more than a few hundred bucks (or whatever amount there is between us). I have cleared my mind of that loan and I’m a much happier person for it.

The great thing about my friend is that he has brought it up a few times since I made that decision, saying he may be able to pay me back if he lands a certain job or gets some side work. I just say, “Great.” One day, I’m sure he will pay me something and we’ll call it even. But until then, I can rest easy not worrying about when or how much it is going to be.

Don’t Lend Money You Can’t Afford to Give

I’m writing about this because last night my sister asked me to invest in a business she is starting with her boyfriend. She asked if I would like to invest $5,000 to $10,000 in her company. My answer was no.

I said, “no” because I can’t afford to give that much money away.

It doesn’t even matter to me how well I think it will do from a business standpoint; there is a chance I won’t get that money back. And that is too much money for me to consider a gift. I know that I would hold that loan against her until the day she paid me back or the day I died. Even if I wanted to, my brain won’t let me write off that much money in my head, and I won’t allow myself to potentially destroy my relationship with my sister. That means I can’t invest.

So the next time a friend or family member asks you for a loan, think about it like a gift. If you never saw a penny of that investment, could you maintain your relationship with that person? If the answer is no, then don’t lend the money. It’s not worth it.