5 Things To Keep In Mind When Organizing A Meeting 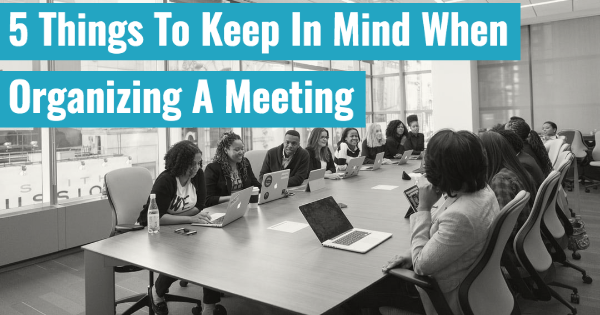 Organizing your first professional meeting can be incredibly intimidating. Not only is the meeting presumably an important part of getting tasks accomplished at work — but if you’re the organizer, it can be key to your advancement at the workplace. There’s a lot of responsibility involved when organizing a meeting, and you probably won’t have a lot of time to prepare. You could very well be faced with not only your coworkers and peers but your superiors as well. This can lead to the sense that all eyes are on you — but remember, the ultimate goal is professional development of some kind, in every meeting. Therefore, it’s crucial that you make the types of preparations key to creating the most productive meeting possible.

Each year, the United States sees 18 million events and meetings organized across the nation. This comes down to $280 billion being spent on these meetings and events as well. But you don’t necessarily have to spend a lot of money on creating a great meeting. Rather, you should keep key tips like those we discuss below in mind, adapting them for your specific meeting goals. With that being said, let’s dive in.

Though you don’t have to spend a lot of money and turn every meeting into a mini-party, you should try to present a professional atmosphere that is clean and aesthetically pleasing. Although attendees don’t necessarily have to dress up for every meaning, specifically professional attire that might not be required on a normal day may be expected at a meeting — and this should be communicated well in advance to attendees. Presentation can make or break how professional a person is; there’s a reason why 74% of people believe that a displeasing smile would negatively affect them professionally. While appearance isn’t everything, it does signal to people how much a person cares about their job and the impression that they make. In turn, you’ll want the meeting space to be neat and tidy, and all necessary materials should be given in an organized fashion, projecting organization.

If you work in a larger office setting, it may be tempting to invite more people than is truly necessary. You don’t want anyone to feel left out, of course. However, if you invite too many people, the space may end up becoming crowded both physically and intellectually. When too many people are in one meeting, they end up talking over each other, which can not only hinder the debate and discussion process — it could also potentially cause unintended conflicts. Therefore, you’ll want to limit the meeting attendance to people who are crucial to the meeting. Depending on the type of meeting you’re having, you may also want to include assistants or trainees, who may need to learn from the goings-on of the particular meeting. While limiting the meeting may be awkward, it’s ultimately worth it; you’re organizing a professional meeting and not a personal get-together.

Even if you’ve limited the number of people allowed to attend the meeting, it can still get out of hand. Many meetings have been derailed because of people going off on tangents, or getting into arguments that really aren’t productive. Therefore, it’s important that one person takes the somewhat awkward role of being the moderator. This doesn’t mean that you’re necessarily leading the entire conversation — the leader and the moderator can be one and the same, but they don’t have to be one and the same. If you are planning on moderating the meeting, you need to be ready to step in with a firm voice, somewhat raised but calm, and curb the conversations back to the direction that it needs to go in. Keep in mind that you may end up having to rein in your superiors — even if not professionally, then in age. As the average retirement age is 63, chances are that you’ll have coworkers who are older than you, and it may initially be uncomfortable to speak over them. However, as the meeting organizer, you will very likely have this kind of role.

Depending on your role in the organizational process, you may be in charge of creating an agenda. If you are in charge of the agenda, make it as clear and concise as possible, and ensure that it is distributed at or ahead of the meeting. Furthermore, you need to make it a priority to follow the agenda. Chances are that you’ll only have a relatively finite amount of time to finish your meeting. You’ll get more done if you follow your agenda exactly. This doesn’t mean that the meeting has to have a rigid, formal attitude — you can take some time to digress if it happens naturally and is productive, but you can’t allow that digression to take you away from the agenda entirely.

Do your best to listen, and ready to take constructive criticism and allow people to disagree with you. The more that you project this idea, the easier it will be for other people to do the same. Look at yourself as a leader in the manner through which the meeting should be conducted. People will find it easier to follow the flow of the meeting if they have an example to follow.

A meeting can be a little stressful and high-pressure, in terms of professional events. But if you’re in charge of organizing one, look at it this way — you can make your meeting what you need it to be! You’ll have the control of creating this professional setting, which requires responsibility but also allows freedom.

Spread the love
By Timothy Werth|February 18th, 2020|Categories: Personal Finance Tips|Comments Off on 5 Things To Keep In Mind When Organizing A Meeting