Child Swept Away On Floaty, Parents Bill Rescuers For Popping It 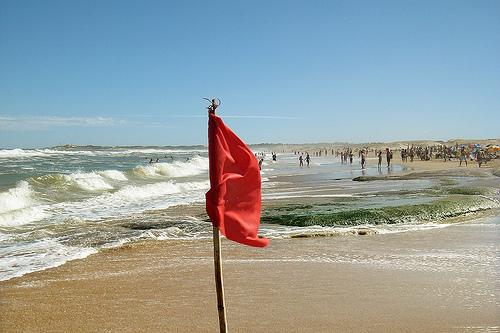 It’s been a particularly hot summer across the world. Where a mile of hiking can burn an average of more than 500 calories, some of the temperatures we’ve seen this summer have caused us to opt for more cooling cardio.

With June being the month the most ice cream is produced, we’ve seen a summer-long need for both frozen treats and ample swimming time. Beaches have been packed in the face of the sun’s unrelentingly toasty gaze and hordes of swimmers, floaters, and sun baskers have flocked together for a cooling dip.

One family was doing so at a U.K. beach in Cornwall when the current, combined with strong winds swept their young daughter out to sea on her floating raft. Terrifying for child and parents both, the parents swiftly contacted the Royal National Lifeboat Institution (RNLI) to rescue their daughter.

The RNLI jumped into action. The situation was dire enough that they had to employ a helicopter rescue mission that ended safely with a diver leaping from the helicopter and being pulled back in with the child in tow. The floatation device was left at sea.

“There was an off-shore wind and the parents immediately experienced their child waving goodbye as the lilo went further and further out. The coastguard scrambled the SAR helicopter which was soon on scene. The diver jumped from the helicopter and saved the child. He instantly put a knife through the lilo (floaty) to save any further drifting and they were both winched to safety,” reported RNLI President Mike Carter.

Carter estimated the rescue mission cost somewhere around 7,000 U.K. pounds ($8,441). After receiving the gratitude of the parents for saving their child, you can imagine the surprise at the RNLI when they also received a bill from the family to cover the cost of their child’s popped floaty.

“Two weeks later the commanding officer (CO) of 771 received a request to pay an invoice for 7 pounds, the cost of the lilo (floaty),” Carter said.

They were taken aback by the request, but took it humorously enough to drum up an appropriately back-handed response:

“I will be happy to pay your invoice on receipt of payment for the helicopter rescue 7,000 pounds,” the Commanding Officer wrote to the parents.

Predictably, the RNLI didn’t receive a response, nor a 7,000-pound check. The point seems to have been taken.

Spread the love
By Timothy Werth|August 13th, 2019|Categories: Blog|Comments Off on Child Swept Away On Floaty, Parents Bill Rescuers For Popping It