Office Yoga During Your Workday May Reduce Pain, Study Finds 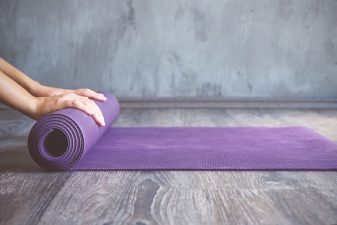 While sitting at your desk for hours on end might feel necessary for your creative flow, you might be feeling some back pain as a result. About 80% of the population experiences back pain in their lifetime, and sitting for work may amplify the problem. To ease your pain and reduce your number of sick days, a new study suggests swapping your creative flow for a much more active type of flow:

The UK study, published in Medical Xpress, involved 150 National Health Service employees in North Wales. Researchers randomly divided the subjects into two groups; one was assigned instructional books on back pain management, while the other practiced eight hour-long yoga sessions. After an eight week period, the yoga group reported feeling less pain than the educational group. On top of this reduction in pain, the yoga group also reported fewer medical visits for back pain during a six month period.

According to Medical XPress the specific yoga program involved movements to stretch the shoulders, hips, and spine. The goal of the sessions is to promote better posture and overall well-being, and was based on the Dru Yoga method.

Yoga and mindfulness during the workday has taken off recently in the U.S., offering both physical and cognitive benefits. A study published earlier this year found that between 2002 and 2012, yoga practice for workers almost doubled.

“Our finding of high and increasing rates of exposure to mindfulness practices among U.S. workers is encouraging,” the researchers wrote in the Centers for Disease Control and Prevention (CDC) journal Preventing Chronic Disease, according to Time. “Approximately 1 in 7 workers report engagement in some form of mindfulness-based activity, and these individuals can bring awareness of the benefit of such practices into the workplace.”

So, the next time you need to boost productivity at the office, you might want to roll out a yoga mat next to your desk.