So you want to learn economics

So you want to learn economics 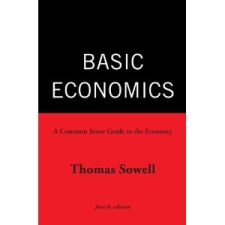 Savings on cover design passed on to the consumer no doubt.

It takes considerable knowledge just to realize the extent of your own ignorance.

The easiest way I’ve found to learn any subject in particular is simply by reading books. Reading lots of books.  If you want to learn something about economics the best place to start is Basic Economics by Thomas Sowell.  This is a very math-lite introduction to economics, and is designed to be understood by the layperson (ie me). I read this book in about three sittings.  I found it to be as engaging as popular science books such as A Brief History of Time or Guns, Germs, and Steel, so if you’re into that sort of thing this’ll be right up your alley.

Economics is not simply a topic on which to express opinions or vent emotions. It is a systematic study of what happens when you do specific things in specific ways. In economic analysis, the methods used by a Marxist economist like Oskar Lange did not differ in any fundamental way from the methods used by a conservative economist like Milton Friedman. It is these basic economic principles that this book is about.

You are a citizen, who doesn’t understand economics.  Thomas Sowell makes you understand it.  Through the use of intuitive examples and clear language Thomas Sowell discusses what forms the underlying basis of economics.  This often focuses on the role that prices and incentives play in determining how scarce resources are distributed and consumed.

Basic Economics covers a number of political issues.  Thomas Sowell is a conservative economist.  The book supports free-market economic policy.  Mostly it does this by using examples to show why the price system and incentives matter.  Sowell goes on to show that time and time again the consequences of most political policy are often far different than the intentions of that policy.  Mostly Sowell is pointing out clear cases where virtually all economists agree with the free-market point of view.  For example, an early chapter in Sowell’s book deals with price controls.  The vast majority of economists would agree with a general statement such as, “most price controls cause more problems than they solve.”

A short explanation of price controls might be useful here.  For example, when there is a price ceiling set on, say bread, in ancient Rome some producers decide to stop producing bread.  Since it is cheaper some consumers use more bread, buying it instead of other foods.  This mismatch causes a shortage.  Everyone as a whole is worse off because there is less bread to go around, and more people are using it when an alternative would do as well.

Now Sowell uses actual real world examples, rather than ones he made up for a blog post.  I think this makes his argument more convincing, though the logic is the same. Sowell, however, fails to identify areas where there is more disagreement among economists.  The minimum wage is a price control and is largely lumped in with other price controls, though there seems to be substantially more disagreement among economists about its overall effects as opposed to price controls on other goods and services.  The arguments he makes are no less convincing for it, but you should know that he may be overstating the economic consensus in a few rare cases.

Sowell does a great job both explaining how the market economy functions, and what serious problems can be caused by government’s meddling in the economy.  If you’re aware that Sowell is an economist from the Chicago school (read: pro free-market) this is a fantastic book to read.  What I would hate to see, however, is someone read just this economics book and assume that it has vindicated their political opinions.  If this is all of the study of economics you’ve done you don’t get to have political opinions on the subject. (Yes, I know that you are legally allowed to.  Just work with me here.) The opposite of this is even worse.  Anyone considering skipping the book because they disagree with free-market economists are doing themselves a great disservice.  You are probably wrong about a number of things.  Reading is part of how people become less wrong.  Especially reading the work of folks who disagree with you.  Thomas Sowell has a great deal of knowledge to drop on you, and the vast majority of it is consensus in the science of economics as far as I could verify, you’d be seriously remiss to ignore the book because of your political bias. I particularly enjoy the way Sowell emphasizes the power of incentives in this book and I’d like to leave you with my favorite quote of his regarding the intersection of politics and economics:

It is hard to imagine a more stupid or more dangerous way of making decisions than by putting those decisions in the hands of people who pay no price for being wrong.

Spread the love
By Adam Woods|September 4th, 2015|Categories: Economics / Politics|Comments Off on So you want to learn economics