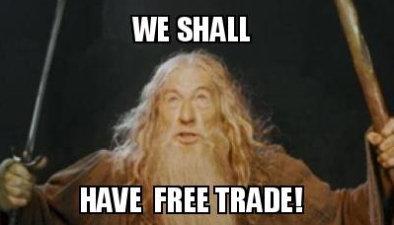 All of the involved countries have finally agreed to the Trans-Pacific Partnership.  I could not be more excited.  It was looking for awhile there that we were going to keep sugar tariffs and, while part of me was looking forward to a lifetime of smuggling bulk sugar across the Canadian border, I’m pretty glad that I won’t have to.  After all, who wants to spend three years of their life rotting in some Canadian jail?

My single favorite quote in the NYT article on the subject is:

“It’s complete devastation of the auto supply chain,” Leo Gerard, the international president of the United Steelworkers, said in a telephone interview. “If you look at the autos these days, they’re assembled from parts from all over the place.”

Yes, my schadenfreude is strong.  Yes, I’m still upset about the automaker bailout.  (Sure, I’m upset about TARP as well.  Its harder for me to be really upset about it though.  Quiz question, what’s the major difference between TARP and the automobile bailout?  Answer: The government turned a profit on TARP.)

First off, global warming/climate change or whatever you want to call it is definitely happening.  Carbon dioxide really does absorb electromagnetic energy in a part of the spectrum that our planet produces, heating it up a small amount.  Will the direst predictions of the IPCC reports come true?  I don’t know.  In the past the IPCC has overestimated the amount of warming.  Do I think that the IPCC reports represents probably the best guess we have?  Absolutely.  Republicans in general stubbornly refuse to believe this and are quickly becoming labelled the anti-science party because of that stubbornness. That is a rant for another time.  Democrats have their own climate change, and that is free trade.

In 1969 Stanislaw Ulam challenged Paul Samuelson (the first American to win the Nobel prize in economics, often referred to as the ) to “name me one proposition in all of the social sciences which is both true and non-trivial.”  This caused Samuelson a great deal of consternation.  How could it be that social science hadn’t generated one useful result?  It took him years but he eventually realized that it was the concept of comparative advantage:

“That it is logically true need not be argued before a mathematician; that it is not trivial is attested by the thousands of important and intelligent men who have never been able to grasp the doctrine for themselves or to believe it after it was explained to them.”

Economics has one best, most tested, high-consensus result.  Democrats, in general, would prefer to simply pretend that such a result wasn’t true.  For if it was true, that would mean it would be in the best interest of the nation to unilaterally declare free trade.  The US would be better off if they simply chose to set all tariffs to zero, even if no other countries followed suit.  Fredrick Bastiat once said, “it makes no more sense to be protectionist because other countries have tariffs than it would to block up our harbors because other countries have rocky coasts.”

Fortunately it appears that democratic presidents take the science on the subject seriously even if the democratic party does not.  Both Clinton and Obama have fought really hard for two landmark trade deals.  Hilary Clinton’s protectionism on the issue seems to be probably political in nature, and while it is disappointing for candidates to lie about their views in order to get elected it happens.  The alternative, that she has somehow forgotten the benefits of free trade is substantially worse, in my view.  It’d be like if a republican was staunchly supportive of climate change science, then in the republican presidential primary said she had doubts.  I wouldn’t believe for one second that the republican flipped on climate change, she’d simply be lying to get elected.  I leave you with one last quotation on the subject from a nobel prizewinning economist:

I am convinced that many economists, when they try to argue in favor of free trade, make the mistake of overestimating both their opponents and their audience. They cannot believe that famous intellectuals who write and speak often about world trade could be entirely ignorant of the most basic ideas. But they are — and so are their readers. This makes the task of explaining the benefits of trade harder — but it also means that it is remarkably easy to make fools of your opponents, catching them in elementary errors of logic and fact. This is playing dirty, and I advocate it strongly.

This quote, of course, is from the famously liberal New York Times columnist, Paul Krugman.

Spread the love
By Adam Woods|October 7th, 2015|Categories: Blog|Comments Off on Three Cheers for Free Trade