Home/Blog/Who will win the 2016 election? 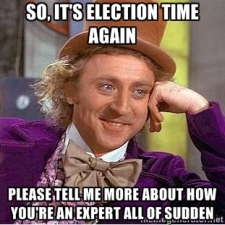 There are a number of ways to figure this out.  Some people look at polling data.  Other people build models based on theories they have about how elections work.  Some folks might argue that its nearly unpredictable, because elections should be nail bitingly close.  In my favorite article on the subject Mickey Kaus argues that elections should split nearly 50-50 going for as long as we have a two party system.  The basic argument here is that each party wants to win elections and stay true to its philosophy.  Therefore, each party moderates their platform just enough to convince exactly the necessary number of people to vote for them.  This is referred to as median voter theorem.  In my view, none of these are the best way to determine who will win the election.

People are biased. They also let their biases influence their view of reality, especially if this view has no consequences. A twitter analysis showed that pundits are correct 47% of the time. People somehow become remarkably less biased when they are responsible for their predictions.  Rather than looking at polls maybe you want to see what a bunch of people who actually have something to lose thought would happen.  Enter the prediction market, in this case PredictIt.org.  In a prediction market people buy and sell basically bets on how a particular political event will turn out.  This has an advantage over regular sports-betting or political-betting in that odds aren’t set by a single experienced person.  Instead odds are determined by the market.  PredictIt makes this simple and pays out $1 to each holder of a correct bet.  Therefore, all bets trade at fractions of a dollar.  These fractions correspond to the percentage chance of the bet coming true.  If Hillary Clinton has a 50% of winning the presidency, then a rational person would be willing to pay no more than 50 cents for the right to receive $1 if she wins. 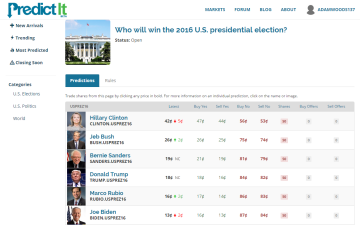 On your first pass you would think that it appears that Hillary Clinton is most likely to win both the Democratic nomination (63% chance) and the presidency (42% chance).  The person with the second best chance to win the presidency is Jeb Bush with 26%.  (Add those together and ponder that depressing fact.) Particularly astute observers will note that there’s something funky going on here.  If you add up the chance of each candidate winning you end up with more than 100%.  Shouldn’t this be impossible?  Shouldn’t astute traders bet no against everyone in order to collect a risk-free profit?

The answer is that an arbitrageur needs to get paid for their time and risk.  If they make a bet today they still have to wait until November 2016 in order for the bet to pay off.  If you assume that they need to get paid 10% on their money for their time these numbers start to make a great deal more sense.  Take the “Buy No” chance and multiply it by 10% to get the opportunity cost of holding the contract.  Then subtract this number from the “Latest” value.  Suddenly all of the values sum to nearly 100% as expected.  After making this adjustment, we realize that the standings are:

As always, a number is useless without a +/- uncertainty attached to it.  In this case the uncertainty may be estimated as the spread between the buy and sell for each bet.  For example, you can buy Hillary Clinton to win at 47 cents, but only sell it for 44 cents.  This implies an uncertainty of 3%.  (So, in honesty I have too many digits of accuracy on these guys).

Just a few comments, first I’m firmly convinced that this is the “best guess”.  These are folks who have real money on the line.  Fortunately if you disagree, suppose you’re Nate Silver and you think Donald Trump has a substantially lower chance, you have every opportunity to put your money where your mouth is.  (Good luck with that!**) Second, its a little relaxing to see that there’s a 80.7% chance that someone not-crazy will get elected.  I sleep a little sounder knowing that.

*You may notice that I removed Chris Christie.  While the last trade for him took place at 12 cents the current bidding is between 8 and 4 cents per share.  The new bid-ask represents the most up to date information in illiquid markets.

**Disclaimer: You’ll probably lose all your money if you even think about this.  Yup, there it went.

Spread the love
By Adam Woods|September 14th, 2015|Categories: Blog|Comments Off on Who will win the 2016 election?