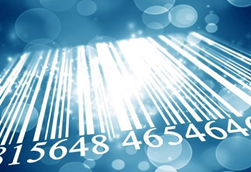 Welcome to the wild world of Electronic Data Interchange!

Advant-e corporation is a tiny company.  There was a time when it was a tiny public company but it is now private and non-reporting.  The main attraction for Advant-e tech is that it makes a lot of money compared to it’s market cap. In 2015 it earned $2.6 million, or 45 cents per share.  The market cap of the company was $23.5 million and individual shares last traded for $4.  The earnings yield of the company is currently 11%.  It generally pays out an annual dividend of 20 or 30 cents per share.  The dividend typically gets paid sometime in spring or summer and this past year it was $0.20, or about 5% on the last trade.

So What Does Advant-e Do?

Advant-e corporation provides an Electronic Data Interchange (EDI) for grocery stores, auto dealerships, and more recently, healthcare providers.  If that doesn’t mean anything to you, I’m unsurprised.  It didn’t mean anything to me either.  The definition from wikipedia is unhelpful as well,

Electronic Data Interchange (EDI) is an electronic communication method that provides standards for exchanging data via any electronic means. By adhering to the same standard, two different companies or organizations, even in two different countries, can electronically exchange documents (such as purchase orders, invoices, shipping notices, and many others)

There isn’t really any point for a supplier to use an EDI that doesn’t give them access to the most stores, so the fact that Advant-e has access to a lot of small grocery stores makes it harder for a startup EDI supplier to compete.

This generally only matters for small grocery stores and suppliers as larger chains have their own systems.

So, how has this model been working out? 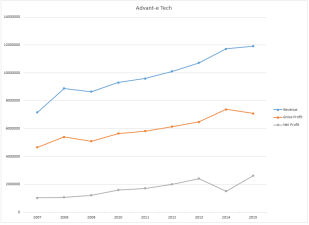 Pretty well, up and to the right is what you want to see with revenue and income. Here’s something more concrete (all dollar values in thousands):

While we do see a little dip in gross profit in 2015, and revenue has clearly slowed, I chalk that up to the shuttering of Merkur in late 2014 early 2015.  Merkur was a division of Advant-e that also did EDI but was software-based rather than internet-based, it helped companies by sending faxes of their paper documents. .  The division never performed all that well and was written off in 2014 (you can see a dip in net income there.)  The company was then reorganized integrating Merkur’s assets with the rest of the company. My best guess is that there was some loss of Merkur revenue which hid more growth in the company, as the internet-based branch (called Edict systems) did $10.3 million of revenue, in 2014.  Even a small drop in the revenue from the Merkur end after the reorganization, could have hidden a significant amount of growth.

Oh man, where do I even start?  There’s so much hair on this, it could replace Trump’s piece.

Even given all the hair, I can’t help myself but love this stock.  It’s got basically everything I want.  Priced low, management pays the profits out in dividends, it grows.  Management owns a bunch of the company and, hopefully, their interests are therefore aligned with mine.  It’s illiquid, it’s tiny.  My fervent desire is to simply sit on these shares forever.

Disclaimer: I am long ADVC, I have no plans to buy or sell any of the stock within then next 72 hours. I wrote this article myself, and it expresses my own opinions. This is not a recommendation to buy or sell any stock. I am not receiving compensation for it (other than from the owner of the blog District Media Corp). I have no business relationship with any company whose stock is mentioned in this article.  Always do your own research before making any trade, buying or selling any stock mentioned.