My Worst Investment – It Gets Worse

Home/Blog/My Worst Investment – It Gets Worse

My Worst Investment – It Gets Worse

A few months ago I wrote this article: My worst investment-ever. The short version is that I invested in a company (Premier Exhibitions: PRXI) which owned the titanic artifacts, figuring that the artifacts were worth much more than the entire company.  I could go on, but it’s really better that you just read the article!

So it turns out, the warning signs that I had feared turned out to be really accurate.  On June 14th Premiere Exhibitions declared bankruptcy (so the stock symbol is now PRXIQ).  Glad I got out when I did, right?  In between when I sold them and the present they had done a 10:1 reverse share split.  So while, I had sold between $0.50 and $0.22, those numbers would be equivalent to $5, and $2.20.

When the declared bankruptcy the stock was at $0.20, 90% lower than what I had last sold it at.  At this point, I had felt pretty good about my decision to sell.  After all I had avoided turning a 90% loss into a 99% loss.  How great is that?

I submit the price chart of Premier Exhibitions without comment: 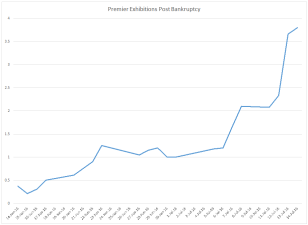 So…yeah.  At this point it’s hit $3.86 after hitting an intraday peak north of $4.  Why is this happening after Premier declared bankruptcy? Aren’t bankrupt companies supposed to be worthless?

In a bankruptcy everyone gets represented in the order of their claim on the company.  The important thing here is that people the company owes money, like suppliers or creditors, get paid before any preferred stock, and the preferred stock gets its liquidation value before the common stock gets anything.  Basically in a bankruptcy the company is liquidated in an orderly fashion and whatever is left goes to the common shareholders.

So What’s Going On?

It seems really unlikely to me that Premier exhibitions will be able to sell the titanic artifacts for that much.  What seems reasonable?  Perhaps $50 million? This would leave about $18 million for shareholders or about $2.26 per share.  I don’t have any particular reason to believe the $50 million.  Frankly valuing these artifacts can kind of feel like throwing darts at a board.  Basically your breakeven today is a sale of the titanic assets for $62 million, assuming the rest of the company is worthless (and man do I ever assume that the rest of this company is worthless).

So what happened to me here?  Well, it appears that I shouldn’t have sold the stock in Premier that I had.  While I was right that Premier was likely to go bankrupt I hadn’t considered that the stock could still be valuable even if they were bankrupt.  Nothing I bought with the proceeds from my Premier stock managed to double over the period, and I would have been better off had I not sold it.  Increasingly, I’m coming to the conclusion that I want to own assets.  Why am I trying to sell them? It’s easy to get lured into too much activity if you’re willing to sell the stocks you own, and while I may have just gotten unlucky with the Premier sale, sales in general just seem to be a bad idea.

Putting 10% of my portfolio into Premier was a mistake, my worst mistake.  It appears that the opposite of a bad decision at one price can be another bad decision if done at a different price.  If I’d have stayed invested in Premier I’d still probably be down 80% or so, but I’d be better off than I am today.

Disclaimer: I have no positions in any stocks mentioned, and I have no plans to buy or sell any of the mentioned stocks within then next 72 hours. I wrote this article myself, and it expresses my own opinions. This is not a recommendation to buy or sell any stock. I am not receiving compensation for it (other than from the owner of the blog District Media Corp). I have no business relationship with any company whose stock is mentioned in this article.  Always do your own research before making any trade, buying or selling any stock mentioned.

Spread the love
By Adam Woods|July 15th, 2016|Categories: Blog|Comments Off on My Worst Investment – It Gets Worse