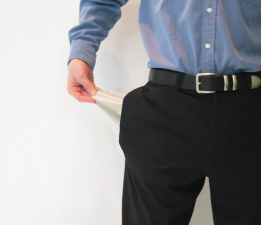 There is certainly a student debt problem in the US.  Since bankruptcy laws were changed so that students could no longer discharge their debt through ordinary means, borrowing standards have slackened, interest rates have gone down, and tuition has gone up.  Consequently, every couple of months someone publishes an article about how crazy their personal student debt situation is and how reasonable they were in acquiring the student debt.  Here is the recent example: Betrayed by the Dream Factory.  The answer they naturally propose is more regulation on schools, but also simply having someone else pay it.  Doesn’t matter who, either make the bank write it off, have the federal government come in and clean it up.  Part of the problem is that the amount of outstanding student loan debt is about $1.4 trillion.  If the federal government forgave that much debt it would be more than all of the federal discretionary spending, including the all of the military spending, in a year.  You could shut down the government entirely, only keep doing the mandatory spending like social security.  Doing that still wouldn’t save enough money to pay for full student loan forgiveness.  In order to pay for total student loan forgiveness you’d have to take in about twice as much personal income tax as we currently do.  To say the least, the situation has gotten out of hand.

You might instead argue that the banks should have to pony up and just write off the student loans. Unfortunately total equity in american banks is pretty similar to the size of the total student debt.  Something like this would wipe out the banking system entirely.  That would probably not happen in an orderly fashion and bank runs would ultimately result in a much larger federal obligation than the original 1.4 trillion.  It therefore seems unlikely that we’re going to have total student loan forgiveness anytime soon.  So what’s someone with a completely unreasonable amount of student loan debt to do?

For those of you who haven’t read the article, let’s break this down.  Samual is a Bioethicist that makes $70,000 per year and has $190,000 in student debt.  That’s a lot of money.  It seems unlikely that someone else is going to make those payments for him.  The good news is that this debt can be paid off. This is Thousandaire, our whole shtick is paying off all of our debt and saving up a thousand dollars.  Those of you who want to go further and become financially independent will have to save up far more than $190,000.  Sam (I hope I can call him Sam) is feeling fatigued about his debt, because he started with $200,000 and has hardly made any progress at all.  Sam doesn’t provide a detailed breakdown of his student debt but we’re going to go ahead and try to make a worse case scenario guess:

Total interest payments on these loans is $13,000.  Now the rule of thumb I like to claim is that if you live like a student for every year you were a student, you’ll pay off your debt.  This is damned inconvenient to be sure, but better to do it sooner rather than later and end up paying even more.  Basically the argument goes thus, society supported him and his education for 5 years.  To pay us back he’s going to have to live like an ascetic for five years.  Fortunately he has some education in philosophy which should equip him to handle this.  Unfortunately, it looks like he’s got a case of the not-my-faults.   This is bad because, its one thing to live a hard life if you feel like you chose it, it’s another entirely if you feel that it was forced on you.  When the going gets hard it’s much easier to give up if you feel out of control and a victim.  Agency is largely the key to happiness, and by giving that up things will be much harder.

Our first test is, is this even theoretically possible.  He makes $70,000, in five years that’s $350,000.  This is more than the under $250,000 he’s going to have to pay back including interest over the next five years.  The remainder is about $20,000.  Fortunately he’s come to the expert of living on less than $20,000 in a high cost of living area.  The plan (obviously) is to pay off the highest interest debt first, hopefully this’ll make things easier.

Our hardest cost to control is simply going to be taxes.  The IRS is kind of a pain in the neck about getting what they think they deserve.  First off you’re going to get hit to the tune of 7.65% for payroll taxes (you know, social security and medicare).  This is going to cost $5,355 right off the top. Yikes.  Then we need to calculate income tax. You get a very small deduction for your student debt, $2,500 last I checked.  This means that your modified adjusted gross income is $67,500.  Unfortunately we’re not going to be able to use any fancy tricks to reduce this, because you need all of it right away to reduce your debt.  We’ll then go ahead and take the personal exemption and standard deduction of $10,350 for 2016.  This brings our taxable income to $57150.  My estimate for the income tax bill is therefore $10,060, combine that with the payroll taxes and that gets us: $15,415. That’s deeply depressing, but what are you going to do, right?  This leaves us with $54,585 left.  This leaves us with $4,550 per month to play with.

Now this is going to require some guesswork, but based on the employer survey of health care benefits the cost should be less than $100 per month.  This leaves us with $4,450 per month remaining.

Alright, Sam.  First things first, you’re living with a roommate for the next five years.  Maybe two roommates.  Why?  That’s how college works, and until you’re out of student debt, you’re living like a student. Washington is expensive, and I’ll assume that this fancy bioethics job is in an expensive area in Washington.  According to expatistan that means that a pretty small apartment is $2,300.  You’re splitting that small apartment until further notice.  The total monthly cost should therefore be $1,150.  This means we have $3,400 per month remaining in our budget.

Maybe you go out for dinner, or eat fast food occasionally.  Not for the next five years.  Living like a student means its back to rice, beans, lentils, fish, and the occasional bit of chicken.  Anything that comes in an individually wrapped container is out.  The goal here is to maximize nutrition and calories per dollar spent.  Meats are out beans are in.  Ice cream is out bananas are in. If you’re willing to cook for yourself you can manage healthy meals on $200 per month.  This leaves us with $3,200.

Living like a student definitely means no cable.  You can have internet and a cell phone.  It can’t cost you more than $60 combined per month (at least you get to split it with the roommate).  Figure it out.   Gas, electric, water and trash should come in at less than $120 per month.  I’m going to assume you’re roommate is a pain about this though and it does cost you $120.  After you split it with your roommate that should cost you $60.  This leaves you with $3,080.

If you have a car strongly consider selling it.  You’ll be better off with a bike.  If you need a car try to do the bike anyway.  I assume that you don’t have kids.  You can live for five years without a car, unless you’d prefer to live the rest of your life in debt.

If you’re fairly certain that there is no other conceivable solution. (Or if you’re too lazy to bother trying anything else), you can go ahead and keep whatever car you have.  Unless of course you’re making payments on the thing.  Then it gets sold and you buy a $1,000 beater.  Students don’t drive nice cars.  They drive beaters.  That’s how it works.  Gas shouldn’t cost you more than $50 per month and your (liability only) insurance shouldn’t cost you more than $80 per month.  This adds up to $130.  This takes us down to $2,950.

Your new hobbies are at the library and public park.  Hope you like reading and hiking.

Nope.  You’re a starving student, and it’s more important to prevent the starving part than to make sure you’ve got netflix. Plus you’re new work is going to take up a pile of your free time.

I remember fondly being in school while working 10 hours a week.  Fortunately you’ve already worked while getting a master’s degree (no easy feat) so this should be quite simple for you.  You’ll need to work 10 hours a week at an hourly rate of at least $20 after tax (so charge $30/hr before tax).  It could be writing, it could be advocacy or it could be tutoring.  All told this should make you an extra $800 per month.

This leaves us with $3,750, paying off your student debt over the next five years (the math assumes we pay the minimum on the low interest debt and focus on the private debt first). About $100 per month is available for incidentals.  Your private student loan debt dies right near the end of year three and you wipe out the federal debt at the end of year five.  You then can face the rest of your life not with:

My situation has finally stabilized, and I should be able to avoid default, though things haven’t improved otherwise. My payments are still crushing, they will be around for decades, and they severely limit my life choices.

I finally feel free, I don’t have to worry about default.  My payments are gone, and my life choices no longer feel limited.  All I had to do was something really hard, one time, for five years.

Yes, I do realize I’m asking something very hard of him, and it’s a lot easier just to ask other people to pay off his debt.  I think it’s most likely that he’ll not do these things, but I figure if he can fantasize about a world where other people finance his dream jobs, I can fantasize about one where people take responsibility for their choices.