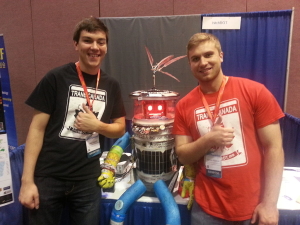 Quite often when discussing the virtues of the Roth IRA I am confronted by the same argument regarding retirement accounts.  “I want to save money, but I don’t want to wait until I’m old to enjoy it!”  This seems quite reasonable.  Who wants to set aside $5,500 every year only to see it again in 2045? Surely, won’t robots have risen up and killed us all by then?

The basic idea behind an IRA is that the government gives you some kind of tax benefit to save for retirement.  The tax benefit of a Roth IRA is that money in the account can be invested, and gains from these investments will never be taxed. Suppose I put $5,500 in a Roth IRA.  When I’m 60, I retire, by then (at a 7% investment growth rate) the $5,500 has grown to $41,000, I can then take $41,000 out and live off of that for a year and pay no income tax.  Compare this to leaving the money in a regular account, I will have to pay roughly $5325 in taxes! That’s almost the entire starting amount!  (Footnote 1: Using a 15% tax rate, the actual effective tax rate could be much higher if I realized gains more frequently, or was earning money from interest rather than capital gains). There is an important caveat. If I take earnings out early (before 59.5 years of age) I’m hit with a penalty fee of 10% by the IRS and have to pay taxes on the earnings.  This is generally where I lose people.  Fear not, dear reader, you can benefit far sooner from your savings!

First off, while you are taxed on earnings, you can take contributions out of your Roth IRA at any time without penalty. That’s right, the biggest downside if you decide this whole Roth IRA thing was a bad idea and you need the money to buy the brand new iPhone 9, is that you don’t get to take the interest you’ve earned out.  So throw the $5,500 into the roth for two years, take the $5,500 back out to buy your new iPhone, and you’re stuck leaving $800 behind in the account.  My heart bleeds for you.  If it’s an emergency, (say you need a stylish case for the iphone), you only pay an extra $80 over the taxes you would have had to pay on those investment earnings anyway.

Second, any money you sock away now is money you don’t have to later.  If you fund your retirement accounts enough in your 20’s that means decades that you won’t have to fund them in the future.  While everyone else spends 30 years playing catchup you have an extra 15-20% added to your paycheck, just because you don’t have the expense of saving for retirement. Here’s a powerful example.  A college degree is one of the very best investments you can make, even at today’s costs.  However, you would be better off if you’re on top of your retirement savings without the degree than if you wait until your thirties with a degree. The median salary of a high school graduate is $30,000.  If you start saving $3,000 (10%) per year at 18, then maybe it gets too hard once you turn 30 and start having kids or other expenses.  Now let’s look at a college grad who blew off retirement savings in their 20’s, then he hit 30 had a kid and a bunch of other new expenses, by the time he turns 35 he realises he needs to start saving, he puts away $7,500 every year for 30 years until age 65. You dear reader contribute half as much for half as long and end up with $1,344,466.93 (assuming a 9% return). The college student who puts it off, he contributes far more, and ends up with only $1,114,314.13.  Now these numbers weren’t adjusted for inflation and you may find you need more money in retirement.  The point, however, is clear: saving now matters.

Everyone knows there’s nothing more attractive than a shiny car to distract from the new reflectivity off your bald spot.

Furthermore, there are investment situations in which you might come out ahead even if you planned on paying the penalty all along. Let’s suppose that you only invest in bonds that yield exactly 7%.  Let’s further suppose that you’re 25, you’re going to $5,500 invested for 15 years, because you know when you are 45 you’ll need to buy your midlife crisis car. Let’s further suppose that your top marginal tax rate is 30%, and you can reinvest your interest.  If you save this money outside of a Roth IRA account, you pay taxes on the interest every year, reducing your interest from 7% to effectively 4.2%.  After 20 years you’ll be left with $14,371.  If you save the money in the roth IRA you’ll have $21,283, you then withdraw the money and have to pay a 40% (30% + 10% penalty) tax on your earnings.  This leaves you with $14,969, about 4% more.  This is an unusual situation and depends on the tax rate, interest rate, and amount of time involved, but it should underline the fact, that not having to pay taxes annually matters.
If you have a budget and your take home pay exceeds your average annual expenses fund your Roth. It has all of the psychological benefits of a piggy-bank and the drawbacks only affect your investment earnings.