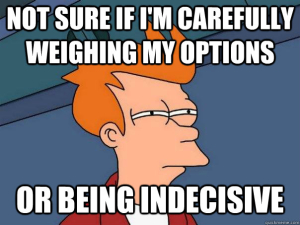 One question that comes up a bunch when you are starting to save seriously is whether to save in your work’s 401k plan or through your own IRA. We’ll talk about the difference between a Roth IRA/401k and traditional IRA/401k later but for now let’s assume we’re talking about traditional retirement accounts. The arguments will probably apply to both however.

The best advantage of a 401K is that you often get matching funds from your employer. Free money is free money. If your work offers a match and you aren’t taking advantage of it you’re commuting a worse financial crime than using high interest credit cards. It’s that bad. Stop eating out, cancel cable, do whatever you have to do to get the match. (Okay, don’t stop paying your mortgage.) (Do move into a cheaper place though).  Another advantage is that since businesses are large institutions sometimes they can negotiate better deals on fees. Sometimes there are worse fees though and you should make a comparison so that you know.  One of the last advantages is more restrictions. Generally in a 401(K) it’s harder to get your money out because you need permission. You won’t wake up one day and decide to buy a boat emptying your retirement to do it. You may think that only other people make mistakes like that, but that’s what they thought too, until it wasn’t. You may also want to check this review about connecting your retirement account.

The biggest advantage of the IRA is flexibility. You can choose almost any traded investment under the sun. You can hold gold or even real estate through an IRA.  This is a huge advantage over 401(K) plans. Sometimes this means that you can find a better deal on an investment product like an index fund because you have more capability to shop around. You also have some more flexibility when it comes to taking your money out. Worse case scenario you pay regular taxes + 10%. You are never at the mercy of someone else telling you that you can’t have your own money. You might also find it a minor advantage that when you leave your job you don’t have to do any paperwork.

There are some tiers here. First thing, you need to put enough in the 401k to get the maximum match. Just do it, you think you’ll miss the money but you won’t. Sell anything that somebody will pay a buck for, go back to the article on ways to make money you haven’t tried.

Now there is a corner-case where you might not want to take the match. If the 401(K) plan is really bad and charges 2% more in fees annually than the investment you could make in your IRA and you are certain you’ll be in this position for the next 32 years. Then, and only then, invest in the IRA for the first year before getting the match in the second year and so on. That’s because the additional 2% in fees you don’t have to pay compound to a doubling over ~32 years. This is such a ridiculous scenario I feel dumb even suggesting it, but it goes to show how crazy the scenario has to be for you to skip the match.

After you’ve gotten at least the match it becomes a lot closer of a decision. If you think you’re an investment expert, you should probably just go with the 401(K). You need the restrictions because if you need this question answered for you and you think you’re an expert you’ll probably lose all your money. It’s a blessing that your 401(k) has some basic guardrails. Take advantage of them.  If you’re very even tempered and are willing to read a bunch of textbooks on the subject of investing you’ll probably be better off with the IRA. Keep in mind that you still need to be careful. You’re in competition with professionals and you’re turning the bumpers off.

If you’re contributing more than the limit of your preferred one just try to max out both. Tax shelters are awesome. Use them. People constantly complain about the tax shelters the rich use and the reality is that they pale in comparison to the tax shelters the middle class has access to. Plan carefully enough and someone making $40,000 per year could pay zero income tax. Use your tax sheltered space!

Spread the love
By Adam Woods|September 28th, 2015|Categories: Blog|Comments Off on Should I invest in a 401K or IRA?