I love talking about politics, but in the past have found arguing about politics to be wildly unproductive.  I’ve found that the easiest way to talk about politics in any situation is that rather than making a statement such as, X is bad/good, I instead prefer X will probably result in Y.  In economics these two types of statements are referred to as positive and normative respectively.  The problem with saying something like, “Bernie Sanders would make a bad president” is that you never actually make a testable prediction.  How would you be proven unambiguously right or wrong?  An argument like that could go on forever.  Instead preferred is, “Bernie Sanders will not be the Democratic Nominee.” (Probably true) or “Bernie Sanders will not be elected president.” (Very probably true) or in the case of this article, “If Bernie Sanders is elected president, and he manages to get his education proposal passed in its current form tuition costs will accelerate or quality of education will decline.” Specifically the return on investment from the all-in cost of college measured as change in lifetime earnings will probably drop precipitously. 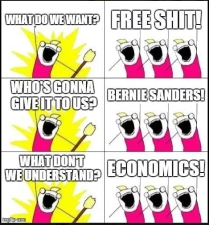 Bernie Sanders proposal is basically to make college at State institutions free to undergraduate students.  Here is a fact sheet from the Sanders campaign.  Here is the actual text of the bill.  Basically the idea is to provide 2:1 matching funds to States for the purpose of making tuition at their public universities $0.  This would be paid for by imposing a tax on stock, bond and derivative trades. Sanders claims this will generate $300 billion.

The price system is a core part of the market economy.  The law of demand is that, in general, if the price of good/service to the consumer is reduced more will be demanded.  If more college is demanded how will that demand be satisfied?  Supply must be increased.  The law of supply says that more of a good will be supplied if the price to suppliers increases.  Therefore, one of two things can happen.  Either universities become more restrictive about whom they accept, or they supply more education at a higher marginal cost.  This cost will now be born by State and Federal taxpayers.  The fact sheet from the Sanders campaign claims that states must meet requirements to reduce “ballooning costs” in order to receive the matching funds. I can’t find anything in the bill to support this.  The only thing I can find in the bill is provisions that ensure that costs will never stop going up.  Specifically Title I, paragraph c, point 1:  “a State shall— … ensure that public institutions of higher education in the State maintain per-pupil expenditures on instruction at levels that meet or exceed the expenditures for the previous fiscal year”.  Cost is guaranteed by the bill itself to increase.  Furthermore the other provisions which set out the requirements for states to get the matching funds also have the effect of driving up costs: 75% of instruction will be required to be provided by tenured or tenure track faculty.  This simply costs more than the alternative.  If you think that university costs are currently overpriced this plan won’t fix that problem.  It simply shifts the costs from one group of people to another.  This is a really bad way to allocate scarce resources.  Speaking hyperbolically this will draw educated people into an industry of creating more Bachelor’s of Arts in Basket Weaving.  While education sounds good and you might think that having a more educated populace will improve the economy, misallocation of scarce resources (in this case smart folk who could be educators or do something else) will do more damage to the economy.

I can’t seem to verify the Sanders campaign’s numbers on the amount of money to be collected from the tax.  As far as I can tell they just estimated the total dollar volume of transactions in the US multiplied it by the proposed tax rates, got something near $300 billion and called it a day. Fortunately, it appears as though the total cost of the program in the first year would be somewhat more than $70 billion. The main problem here is that trading volume in the US is assumed not to react to this new tax.  Over 60% of trading volume in the US is high frequency trading.  Most of those trading strategies flatly would not work if this tax was imposed. Therefore, volume would probably decrease substantially. My second testable prediction therefore is, in the first year the tax being in effect the program will collect less than $150 billion (obviously adjusted for economic growth from the date of the proposal to the year it actually gets  implemented).  Basically the tax interacts with stock trades according to the same laws that the subsidy interacts with higher education.  The reduced proceeds lowers supply and the increased cost reduce demand.  The question is what will be the amount of economic destruction (deadweight loss) caused by this tax?  This gives my third testable prediction, the spread (defined as the difference between the bid and the ask) on stock trades will average at least 0.5%.  Rather than having a bid of 31.56 and an ask of 31.57 we’ll have a bid of 31.50 and an ask of 31.64.  This unfortunately means that the total cost to people buying and selling stocks won’t be 0.5%, but rather will be more like 0.75%, 0.5% for the tax and 0.25% for the spread*.  In my view a tax that destroys at least $75 of value for every $50 of revenue is a bad tax.

I’m not saying all proposals to reduce the cost of higher education are bad.  Don’t fall into the trap that politicians love to lay out.  1) A is a bad thing. 2) We must do something about A. 3) B is something! 4) Therefore if you oppose B you must like bad thing A. That being said its probably a bad idea to simply criticize something without offering a solution.  My suggestion would be to restore regular bankruptcy treatment to student loans.  Markets work best when the person risking the money is the same as the person making the purchasing decision.  The job of a bank is to make sure that it weighs the risk of not getting repaid appropriately.  When you take risk out of the equation for a bank, it ceases to behave responsibly.  If the bank has skin in the game, its interests are aligned with the student.  The bank then needs to make sure that the student is getting their money’s worth for the education, because if the student doesn’t get their money’s worth the bank doesn’t get repaid.  In our current system the bank gets repaid no matter what, “education” and loans get foisted on young folk and taxpayers are left holding the bag.  So goes my last prediction.  If we go back to the system we used to have, where bankruptcy was an option for student loans, the rate of tuition increase will slow and the return on investment of a college degree will increase (again measured as a change in lifetime earnings).

*The spread is a zero sum game.  The total spread is 0.5%.  Someone pays that portion of the spread in each transaction.  You may think that if you put a limit order in then you personally will be safe, however you have no guarantee to sell or buy at your limit price.  The price could move in the other direction without you being able to make your transaction.  I figure split the difference and say that a person pays half the spread on the round trip.