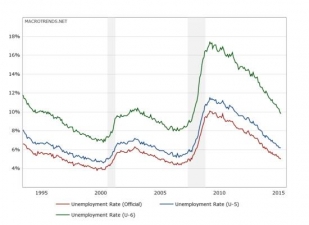 The grey indicates periods that were their fault.

As we’re gearing up for election season it seems like a good time to remind everyone what unemployment statistics are and how they work. I’ve heard entirely too much uninformed discussion on the subject. First off, regardless of your party affiliation you should take a moment and realize that the economy is doing good right now.  The economy is rarely doing this well, and in some sense, standard of living has never been so high in the history of the country. We should also note, the same thing happened during the Bush years.  For some reason people only seem to want to believe progress is happening when their guy is in office.  In general the history of the American economy has been an upwards march of awesome tempered by the occasional recession, with the large exception of the great depression.

It’s also important to remember that recessions are not a recurrence of a crappy standard of living, they’re a brief (half-year) long pause in an otherwise upward march.  Usually recession means returning to a standard of living last seen a couple years prior.  Some people do lose their jobs during recessions, and it is bad.  Some people also lose their jobs during years when the economy is good as well.  I recognize that average standard of living doesn’t mean that everyone is doing better, just that folks are doing better on average.  It is important to recognize good things when they happen despite the fact that some bad things still happen.

This number has had some criticism over the years.  I’ve found a really easy method of guessing the political affiliation of these critics.  It’s simply the opposite of whatever party holds the white house at the moment.  There is a quite simple reason for this.  After a recession, the economy recovers (shocker).  During a recession, however, partisans spend a lot of time claiming that the opposing party’s policies will extend the recession indefinitely, cause a depression, or simply sink into the ocean.  When these claims fail to materialize (double shocker), partisans have become so invested in the story that they were telling they have to save face somehow.  Therefore, rather than acknowledging that a recovery has happened, they call it a “jobless recovery” (or “precursor to inevitable catastrophe”).  Since they can’t acknowledge that unemployment has gone down, they simply claim that it isn’t a good measurement by nitpicking what goes into the data.  Enter the U6 unemployment rate.

Partisan A: Clearly this president is awesome, the unemployment rate is down to 5% from 10%!

Partisan B: Well, it isn’t a true recovery.  The only reason the number has gone down is that the unemployed have gotten discouraged, or got just part-time jobs rather than good full-time jobs.  The recovery isn’t real.  You just can’t see it because you’re in the tank for your guy.  You should look at the U6 unemployment rate, it includes these extra fellows and is 10%!

The implication is that the unemployment rate hasn’t changed.  That, somehow, it went from 10% to 10%.  Of course you can’t compare the headline number (which is lower) to the U6.  But, it’s a good way to imply that no progress has been made.  If someone says something like this to you, look up the trend of the U6 rate over the last few years to get a good idea of what is actually going on.

So what do I use?

Personally I think the headline number is most useful, but it probably depends on what you’re using it for.  If you’re trying to prove that your party is better at managing the economy, I’d suggest doing something more useful, like digging a big hole in your backyard.  When you’re done you can fill it up again.  If you must, then the partisan answer to the question is U6 when it’s their fault, and the headline number when it’s our fault.

If you do find yourself unemployed the important thing to remember is that you need to be taking active steps to find work.  Looking for work isn’t something you do by virtue of being unemployed.  It is an activity you have to literally undertake.  You have to make actual phone calls, and go to actual establishments of employment.  Online simply doesn’t cut it.  Until you find your next job I recommend taking a look at some alternatives you might not of considered.  Even making a little money helps, and it helps keep you focused.  If you’ve been reading personal finance blogs like this one, you hopefully have an emergency fund or some liquidity that you can tap in the meantime.  Most importantly, don’t spend your time arguing about unemployment statistics online.