Where to Exchange Money

Where to Exchange Money 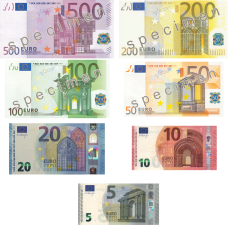 They say specimen so you don’t try to print them off at home. It’s hard to see how anyone would get what your inkjet spits out confused with a bill, but there it is.

The best place to exchange money is inside your credit card.  Sometimes that’s not possible, in which case we’ve got a list of the rest of the places that you should exchange money.  Ultimately what you’re worried about here are fees.  There are plenty of people out there willing to sell you some story about how they know how to time currency transactions in order to save you money.  The financial world is full of superstitions like that, do your best to ignore it.  If anyone out there thinks I’m wrong I’d be happy to take a bet on the subject.

Alright, now I’ve said it twice.  Just get one without a foreign transaction fee and call it a day.

There are a few high yield checking accounts out there.  The basic idea for these is that you jump through a few hoops and the checking account pays you an above market rate of interest (up to a specific balance) and will often reimburse ATM fees. I recommend Consumers credit union. The requirements usually involve using the debit card a dozen times in a month and setting up direct deposit.  The interest rate alone is generally worth it, but using it to change money from foreign ATM’s is the icing on the cake.  Whenever I need cash abroad I just get it from a random ATM, knowing I’ll be reimbursed.

You should probably be a member of your local credit union.  In principle the profits from the credit union flow to you rather than to shareholders.  Generally this means that all kinds of things are cheaper at the credit union.  Of course because they don’t have to look after their profits sometimes bureaucracy can get a stranglehold on your credit union and the fee schedule might not make any sense from any perspective, so it pays to check that your credit union is actually giving you a good deal.

What’s a good deal? Whatever google tells you the exchange rate is, basically.

Also, as a bonus your credit union may eventually convert to a bank, in which case you’ll have an opportunity to make money in its conversion.  (You see, the owners of the credit union are its customers, when it converts to a bank it will be owned by shareholders.  To convince current owners, that’s you, to do the conversion the credit union needs to offer you something valuable.  Usually, that means you can purchase stock at a discount.  That’s a fantastic deal.  Your credit union probably won’t do this, but it’s essentially random upside. )

Usually you can order foreign currency, online or by phone, in advance from your bank and get a good rate with a minimal fee.  If you show up at the teller demanding Euros you’ll probably get a rate that’s not quite as good.

It’s not going to be a great deal to do this, and I’d anticipate it to be somewhat worse than your local bank, but your mileage may vary.  (That’s what YMMV means if you ever see it on line.  That’s one I have to look all the time.  That and TFW, or SMH.)

(That feel when, and shaking my head, respectively)

(I can’t imagine saying either of those things so often that you’d need to abbreviate them, but TYHI.)

(There you have it; That one’s not real but what are you going to do?)

They need to get rid of their foreign currency, you need the foreign currency.  You can probably get the fair rate, since either of you are going to get screwed at your destination.
Cash Exchange

These places exist mostly in tourist spots.  They’re pretty universally awful, only use in an emergency.  Alternatively, send your enemies there.

Don’t have enemies?  You will if you send people here to change their money.

Cash Exchange at the airport

This is good for when all of your foreign currency gets stolen, as well as your atm card, but you still have a roll of $100’s in your sock.  Change just enough to get you to the nearest bank, or some other place that will repair your problem.  Even then you might be better off begging other american’s for bus fare, or hanging out near the forex place looking for people who look like they’re departing the country.

Spread the love
By Adam Woods|July 22nd, 2016|Categories: Blog|Comments Off on Where to Exchange Money