7 Steps to Minimize Your Taxes Before 2017 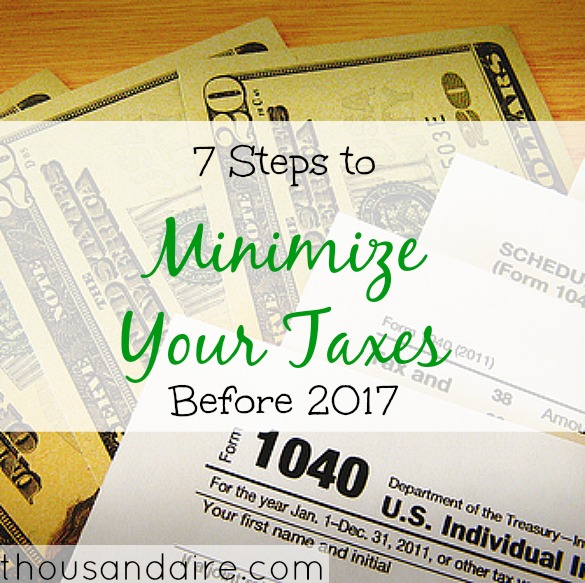 Every December before the end of the year I run down this checklist to make sure that my taxes will be roughly what I had withheld from my paycheck.  I try to keep my tax withholding as low as possible; I have no interest in giving Uncle Sam what amounts to an interest free loan, just so I can get a big refund check in April.  I also don’t want to end up owing money in April, the Feds don’t really like it if it turns out that they gave you an interest free loan over the course of the year.  Landing on a nearly zero return every year takes a little doing, but here are the steps I take to manage my tax burden as the year comes to a close.

This is fairly straightforward.  Grab your most recent paystub (probably November), often it’ll have your total gross income for the year so far, then add one additional month of gross salary. Then subtract any deductions that you have taken, things like:

This is gonna be your guess at your adjusted gross income for the year, then subtract the standard deduction:

After that, go ahead and subtract the number of personal exemptions you can take (this is generally one for each person involved in the tax return, ie, one for you and each of your dependents).  This determines what tax bracket you’ll end up in, this matters when making marginal decisions, but your actual tax rate (your total federal tax divided by your total income) is much, much lower than your tax bracket.

2. Compare your income with MAGI breakpoints

What are MAGI breakpoints you ask? Well, a bunch of stuff in the tax code really cares about what your modified adjusted gross income (MAGI) is.   Rarely, if you increase your income just above a MAGI breakpoint an additional dollar of income can cost you more than a dollar in tax.  For example, if you earn a dollar less than $30,750 you can claim the saver’s tax credit (worth $200).  If you earn a dollar more than $30,750 you lose the saver’s tax credit.  These few dollars cost you $200 in taxes.  Below is a table of credits for various MAGI’s:

*This isn’t a typo, the Roth ira phase out starts at $0 for married couples filing separately. I gather that this is necessary to avoid people using it as a way to get around the IRA, though I don’t really understand why the ability of a wealthy couple to do this would be such a problem.

You can reduce your total MAGI by selling investments that have lost money since you purchased them.  You can take up to $3000 of losses above and beyond your capital gains against your income.  The only unfortunate part is that, due to the wash-sale rule, you can’t immediately repurchase the investment.  You have to wait 30 days before or after the sale to repurchase the investment, if that’s what you plan on doing.  This is dangerous because the investment you sell could recover during the period you sold it.  In principle, according to the efficient market hypothesis, one investment is basically as good as any other, so selling out of one to buy another (and booking a tax deduction along the way) shouldn’t hurt you any.  Unfortunately, markets aren’t precisely efficient, and people often want to sell at precisely the wrong time. Therefore, it bears some thinking to make sure that you’re selling purely for tax reasons, not emotional ones. While this is a violation of our admonishment to be as passive as possible with your investments, the reduction in your taxes could potentially make the activity worth it.

If it looks like you’re going to have an unusually low MAGI this year you can take advantage of it by tax gain harvesting.  In this case the wash-sale rule doesn’t apply, so we don’t worry nearly so much about the admonishment to be passive, as you should be able to get nearly the same price for your repurchase.  Basically the strategy is to take your gains in years where your capital gains taxes will be low.  For more details on the strategy check out: Tax Gain Harvesting.  This works pretty well if you’re a ways under one of the breakpoints or if you’re in the bracket in which capital gains aren’t taxed.  This has to be done in the calendar year though!

If you’re planning on converting your traditional IRA to a Roth IRA you want to do it in a year when it won’t shove you over one of the MAGI breakpoints.  Of course, if you expect that all of your future tax years are only going to make this worse, you might as well bite the bullet and do it now.  I check if I want to convert any traditional IRA’s near the end of the year, unfortunately I haven’t really had a good opportunity to do that quite yet.

I’m not a real accountant, I’m just a dude online, so you’ll want to carefully analyze this strategy with your CPA, but it seems to me if you’re going to buy an ad campaign or something you might be able to load some of your costs into the current tax year by making purchases before the tax year ends.  I believe this will reduce your MAGI, and it could take you under an important breakpoint, say….the savers tax credit, or one of the havin’ a kid tax credits.  It’s worth a check.

These are sometimes called itemized deductions, and these won’t change your MAGI. If you’re like me you might very often take the standard deduction.  It probably makes sense to go ahead and save the items which you might be able to take a deduction on to do them all in the same year, for example, if you normally give $4,000 per year to charity, and take the standard deduction, it probably makes sense to instead give $8000 every other year.  The charity still gets the same amount of money over time, but you get to take an $8,000 deduction on even years, and still take the standard deduction on odd years.  The extra $2,000 deduction if your single can add up to real money over the years.  Examples of below the line deductions which make for good bundling are: mortgage interest, charitable contributions, educational tuition, costs related to investment activities, taxes, as well as unreimbursed medical and dental expenses (above 10% of your income).

Make a checklist for lower 2016 taxes!

Every year I go over this and check that there isn’t anything which I missed.  The other big one is IRA contributions which can take place at any point up through the tax due-date, but I mainly use traditional IRA and roth IRA contributions to make sure that my total adjusted gross income ends up exactly where I want it to after I receive a W2 from my work and the various 1099’s I seem to collect from the rest of the world.  The important thing is to have a process so that you aren’t shocked every year come tax time, wishing you had done a little more to change your tax liability.  If you have anything to add I could sure use another couple steps!

A note about contributions

I’ve excluded 401k and HSA contributions as its a little late in the game to talk your employer into making big changes to your withholding, but I’d highly recommend making sure that your 401(k) contributions are where you want them to be about halfway through the year.