All Advice is not Created Equal

Off the wall ideas are incredible. I like to think I come up with some pretty interesting ideas myself, like not paying off your student loans or getting married for college money.

But here’s the thing about my crazy ideas; they are all pure. Whether I’m right or wrong, my goal is to share my opinion, promote thinking and maybe even make you laugh once or twice.

That’s why I get really pissed off when people say things purely for personal gain.

I found an article by Paul B. Farrell today, and I officially hate him. No. I loathe him.

The Sky is Falling!

Paul Farrell pretends to be an economist and environmentalist. In reality, he’s nothing more than a fear mongering jerk. It’s just a guess, but I’m pretty sure this guy is short selling the entire stock market and doing his best to terrify people and trick them into selling their own investments so he makes more money.

Here’s an example of his article entitled, “A ‘no-growth’ boom will follow 2012 global crash”.

And yet, the facts about the coming catastrophe are so obvious. Just apply a little grade-school math and economic common sense: Our planet’s natural resources can reasonably support about 5 billion people. That’s a fact. Another: Today we have 7 billion. That’s a problem, 2 billion too many. We’re consuming commodities and natural resources at a rate of 1.5 Earths, according to estimates by the Global Footprint Network of scientists and economists. 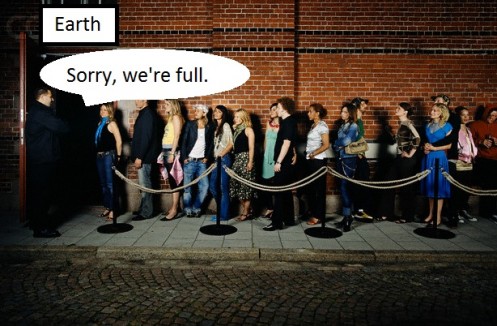 Our planet can only support 5 billion people? That’s a fact? It’s so obvious. According to whom?

I’m sure there are some people believe the Earth’s capacity is 5 billion. It may even be true. But to bluntly say it’s a fact without presenting any data to support the hypothesis is absolutely ridiculous.

His article goes on to say that it’s too late to even worry about global warming. The damage has been done, and because of global warming, the world economy is going to be blown to smithereens. Take the following quote as exhibit B:

What will trigger “The Crash” he sees coming? “If you grow an economy or any system up against its limits, it then stops growing and either changes form or breaks down … As our system hits its limits, the following pressures will combine, in varied and unpredictable ways, to trigger a system breakdown and a major economic crisis (or series of smaller crises) that will see us slide into a sustained economic downturn and a global emergency lasting decades.”

As Gilding sees it, the coming crash is “not a doom and gloom prediction, but an inevitable physical reality.”

First of all, notice how the person Farrell quotes continues to write in absolutes without providing any real, meaningful data. Just more fear mongering.

The article then goes on to tell people where to invest their money to actually turn a profit in this scenario. You have got to be pooping me!

He’s talking about an economic crisis so severe that it results in “a global emergency lasting decades”. And yet, instead of telling you to invest in bottled water, canned foods, weapons and ammunition, and a safe house for you and your family, he wants you to invest in wind and solar stocks.

If his predictions come true, a $100 bill will be about as good as the warmth it will provide by burning it. The only things of value will be physical goods that help you survive.

Use a Critical Eye When Reading Investing Advice

I am 99% sure this guy is either heavily invested in a variety of green companies or funds, and/or has short sold the rest of the stock market. He’s doing everything he can to influence other people to buy or sell stocks that will make him money.

I remind you that investing advice rarely comes without strings attached. When someone recommends you invest somewhere, there’s a good chance they are already on the bandwagon and are recruiting more members. That doesn’t necessarily mean it’s bad advice; just that it’s not objective.

The blatant self interest in this guy’s post is hard to miss, but others do a better job of concealing it. Heck, I might have some ulterior motive to influence your behavior for my own personal gain. I promise I have no such motive, but do you trust me?

I think you can trust me because I provide data and/or explanations. I always share the reasons I believe certain things to allow my readers to understand where I’m coming from. That way they can form their own opinion. And I’m nothing special in this regard; most credible writers do the same thing.

People like Mr. Farrell are the exception. Spouting off radical “truths” with no data or even an explanation of how he came to believe something.

If you are going to take anyone’s advice regarding what you do with your hard earned money, I recommend thinking critically about what they are suggesting and possible reasons why they might have ulterior motives. Don’t let some snake oil salesman trick you into padding his bank account.

As a footnote, here’s the rest of Mr. Farrell’s stupid article. I don’t even want to link to him and provide even one additional view of his crap, but I actually believe that people should have the opportunity to go straight to the source of information and make their own decisions. What a concept.