I’ve already written about my brand new TV that I bought as an open box item from Best Buy, and how I saved 15%. I forgot to mention that the salesman tried to sell me a very expensive wall mount and some ultra expensive HDMI cables for the TV. 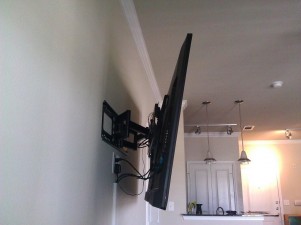 That stuff is SO MUCH CHEAPER on Amazon.

I bought from Amazon is super sweet because it pulls out from the wall and swivels. In my new living room, the TV is mounted almost in the corner. Without a swivel wall mount, the TV would be practically useless to about half the room.

Did I mention that wall mount cost $70 from Amazon, includes a 10 foot HDMI cable, and was shipped free?

If I wanted a swivel wall mount for a 55″ TV and a 10 foot HDMI cord from Best Buy, it probably would have cost me at least $150. I tried to find an example of what I might purchase at Best Buy, but it’s so hard to search for things on their site I gave up.

A few weeks ago I was in training at work and the lady running the training said, “I learned something yesterday that I thought was really interesting. Do you guys know who Best Buy’s number one competitor is?”

About half the people in the room were under 30, and many of us yelled out “Amazon!”, which is the right answer. But it hit me that a lot of people don’t realize that Amazon sells almost everything Best Buy sells, and they do it at much cheaper prices.

Amazon is also much easier to search and has much more useful user reviews and comments. Best Buy obviously has the benefit of physical store locations, which really helps when purchasing something you want to see with your own eyes (like a new TV), but that’s about the only place where Best Buy beats Amazon.

Amazon is Great for Our Economy

Some people might see Amazon driving Best Buy out of business as a bad thing because Best Buy is closing stores and downsizing, which means people are losing their jobs.

But the reason those stores are closing is because Amazon can sell the same things at cheaper prices and with better service. It means consumers have more money to spend on food, clothes, or anything else they might want because their electronics purchases were 10-50% cheaper.

Getting the same thing at a cheaper price is good for the buyer, the seller, and the whole economy (except the person selling that “thing” for a higher price).

Readers: Tell me about a store that sells great quality products at great prices.