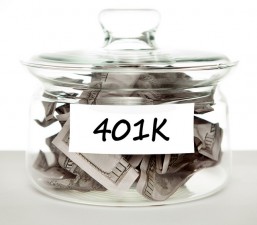 I ran across a really common objection to fully funding your 401(k): Disregard a terribly common bit of advice about your 401(k).  This is certainly one of the more well written version of this objection, but it’s not new.  Boil the article down though and really it’s the common whine that if you put money into a 401(k) you won’t be able to get it back out (frankly, given the way most people manage their finances, that’s a big advantage).  It straw-mans a bunch of personal finance theory, then assumes that consumption smoothness (spending the same amount of money every year) is necessarily more important than other goals, like control over your time.

Schrager makes a key assumption at the beginning of the article.   She claims that personal finance folk are prioritizing fully funding your 401(k) before any other personal finance goal, like saving up an emergency fund.  She doesn’t link where she found this, and the links she does provide don’t seem to over-prioritize the 401(k) at all.  This is all too common among critics of fully funding your 401(k), it’s important to make funding your 401(k) sound as scary as possible, what could be worse than going without an emergency fund to keep your 401(k) funded?  I believe she saw someone with a list personal to them, somewhere that prioritized their 401(k), but writing a whole article about something that essentially no one thinks is a good idea sounds terrible.

Schrager argues that people with volatile incomes shouldn’t necessarily fully fund their 401(k), and she doesn’t fund her 401(k) beyond an employer provided match.  I’m glad that we agree that a bunch of free money is still worth it.  She further claims that you can go ahead and invest in stocks outside of a 401(k).  She further goes on to throw the IRA into the mix as well. This is perplexing to me, simply because the Roth IRA makes a great emergency fund if you’re like Schrager and aren’t planning on investing in it anyway.  (I should clarify, the Roth IRA makes a great emergency fund, but it’s an even better retirement fund.  Since your tax sheltered space is limited, I’d strongly suggest contributing to a Roth and an emergency fund, but if you’re gonna be all I’m too good for retirement accounts about it please fund the Roth.)  Basically her argument boils down to being scared of the penalty and trying to engage in consumption smoothing.

Basically the whole argument reads like someone who doesn’t really understand how 401(k)’s work or what the most common personal finance goal actually is.  This is really strange for someone who specializes in pension economics.  Honestly I wouldn’t bring it up if I wasn’t so sure she was misunderstanding key points about 401(k)’s and personal finance in general. Schrager, you really can have your cake and eat it too.  If your goal is “consumption smoothing” you should note that investing in stocks is probably a bad idea.  Stock returns are anything but smooth and it’s entirely possible that your income could be correlated with investment returns. Any money going into stocks might as well go into a 401(k), because you can take money out of a 401(k) if you lose your job (the cause, I assume, of the income volatility).  Yes you do take a penalty, but you also have a substantially lower tax bill in years when your income is substantially lower.  The other important use of the 401(k) is that it allows your total tax bill to hit important breakpoints in the tax code.  If you have a pile of stocks (which you apparently do) you should note that you pay no taxes on dividends and capital gains if your after 401k contribution income is below ~$75,000 for those that are married filing jointly.  This savings could easily be enough to justify paying the 10% penalty later.  Furthermore, money in a 401(k) compounds without taxes.  This is often overlooked, but can pay the penalty by itself.  For the same tax bracket, you should keep in mind that the total effect of a 401(k) is mathematically equivalent to not taxing earnings on contributions.  If you pay an additional 15% in taxes on earnings in stocks outside of your 401(k), then as soon as earnings are about as large as the initial investment you’re doing worse than paying the 10% penalty.  This, based on historical stock data, would probably happen in as little as 10 years, so it’s not really fair to use the 59.5 number.

Lastly, most of the people I talk to in the personal finance community rate control over their time far ahead of spending the same amount every year.  Any retirement contribution you make today is two similarly sized contributions you don’t have to make next decade.  If you overshoot, then you just retire early. Alternatively, when the next job loss comes around you don’t have to panic that you aren’t going to be able to fund your retirement.