Student loan defaults could crescendo into the next economic meltdown — but would forgive them really solve the problem? 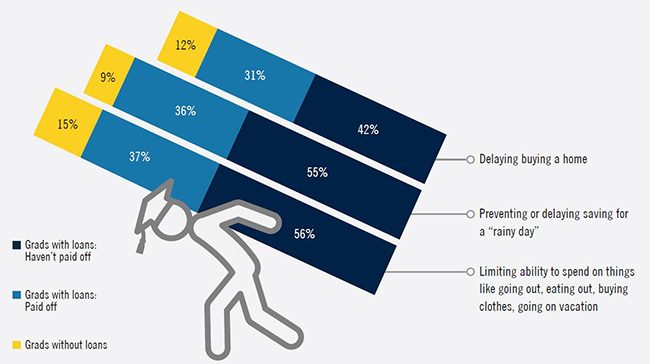 Federally funded student debt hovers around $1.4 trillion in outstanding balances; a report by The Levy Institute at Bard College examines the macroeconomic effects of canceling all or part of this debt.

That is almost exactly the same amount as what the U.S. Congressional Budget Office estimated the recent Tax and Jobs Act would cost, in the form of an expanded federal deficit. That’s why the proposed tax costs are only temporary — they go away in about ten years.

Speaking of temporary, in order for the Levy Institute’s proposal to be able to work, the Tax and Jobs Act would need to be overturned first — otherwise, the federal deficit would double and a recession would kick in.

Also, the proposal might require legislation to tamp down on what some say might bring the student loan crisis right back again. For-profit universities are apparently responsible for a disproportionately large amount of student loan defaults.

Laws manding some form of credit coaching for students as soon as their first semester in a financial aid program might nip a lot of these problems in the bud, especially because those who drop out or don’t complete degrees are another group with above-average rates of student loan defaults.

So, what’s your take on the student loan crisis, readers? How much debt did you take on for your education, and for how long?