Glee Philosophy – Should You Run Away From Your Problems?

I blog about Glee because I love this stupid show and actually fully intend on being a cast member one day. If you don’t watch it already, well set your Tivo because it’s awesome.

Tonight’s episode centered around Kurt (who is the only openly gay guy in his school) and the school bully, Karofsky, who is a homosexual but is in the closet.

In fact, Kurt is the only person who knows Karofsky is gay due to an awkward kiss between the two. (I’m no homophobe, but has there ever been a gay kiss on TV that wasn’t awkward? Maybe that’s just me.) Karofsky is so worried about anyone else learning of his sexuality that he threatened to kill Kurt if he told anyone. Kurt was so scared of Karofsky that he feared for his life and decided to transfer schools to ensure his safety.

To put it bluntly, Kurt ran away from his problem.

I’m not saying that is necessarily a bad thing. I believe there are certain situations in life where the best answer is to run away.

Financially, whenever you owe someone money, “running away” is always an option. I recently helped a friend deal with a situation where he had old medical bills from college that were hurting his credit report. He had to decide whether to pay them or just let them go away. 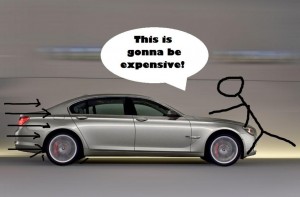 About three years later, my friend graduated from college, got a job, and is doing well enough financially thanks to a decent job and living at home. However, Tickle Me Dough Face can’t get a credit card because he has this old overdue mark on his credit report. He has two options to address the situation; he can pay off the debt, or he can run away.

The statute of limitations in Texas is four years, so he can’t legally be sued to collect the debt in about a year. However, it will remain on his credit report for seven years unless he pays it off, thus making it very difficult to build a solid credit score.

After talking with this friend, Tickle Me Dough Face has decided to pay off the debt. I like this decision because it will not only help his credit, but I also think it’s the right thing to do. It sucks that he got hit by a car and had to pay medical bills, but he did receive services and didn’t pay for them.

The nice thing is he can probably pay somewhere around 20-50% due to the fact that the debt has been around for about three years and the collections agency holding the debt probably only paid a few pennies per dollar of the debt. Yay for saving money!

I actually have a rule on my personal mission statement that states the following: “I will pay on any debt I owe or any bet I lose.” Even though getting hit by a car seems like a crappy way to accumulate debt, I think I would still feel a personal responsibility to pay the medical bills. Maybe that’s because I have weird morals.

For today’s Thousandaire Question: Have you ever considered running away from a financial problem? If so, what decision did you end up making?