How Can You Argue With Warren Buffett?

On Sunday Warren Buffett, arguably the world’s greatest investor and certainly one of the world’s richest men, posted an opinion piece in the New York Times stating that we need to raise taxes on the Super-Rich.

While I’m not a fan of higher taxes, how can you argue with Warren Buffett? 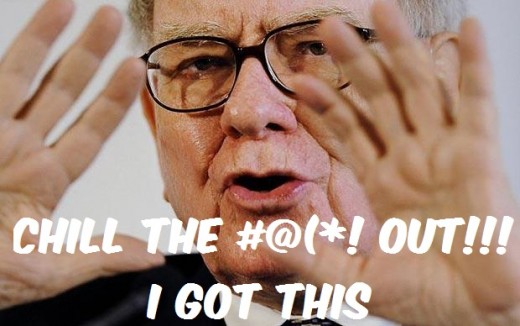 The fact is, Buffett paid a lower percentage of his income in taxes last year than anyone else in his 20 person office. I don’t care how conservative you are; it just takes a bit of common sense to realize this isn’t right.

Well then, I might as well just jump on the Obama bandwagon, right?

I said I agree with Buffett, not Obama. Here is Warren Buffet’s solution, as quoted from the New York Times:

Job one for the 12 [people commissioned to tackle the deficit] is to pare down some future promises that even a rich America can’t fulfill. Big money must be saved here.

The 12 should then turn to the issue of revenues. I would leave rates for 99.7 percent of taxpayers unchanged and continue the current 2-percentage-point reduction in the employee contribution to the payroll tax. This cut helps the poor and the middle class, who need every break they can get.

I agree with this as well. The payroll tax break is a very welcome tax break for anyone who earns taxable wages. I’m all for reducing taxes because I believe the American people themselves are better at stimulating the economy than Washington. Yay for lower taxes! We’ll address the 99.7 percent of taxpayers next.

Here is where Mr. Buffett and Mr. Obama disagree. Our president believes people with an annual income of $250k are so rich that they need to pay higher taxes. Mr. Buffett thinks that cutoff is $1 million a year.

If I have to trust economic advice from one of those two people; sorry Barack, I’m going with the Oracle.

I personally know families who are making around $250k a year that can’t afford higher tax bills. You might think those families are just horrible with their money (and some might be). But in this particular case, I’ll leave you with this question: how far does $250k a year really go when you are already paying 33% in taxes on that money, trying to save for retirement, and putting three kids through college while raising another three at home?

If you raise the taxes on these families, they will have to make a decision. Either accept the fact that the new taxes cut into their income and stop paying for their kids’ education, or reduce costs in their small business (most likely by firing workers). Who do you think is going to win that battle: the child or the employee?

You guessed it. People are going to lose their jobs if taxes get increased on people making $250k a year.

What About that “Compromise” Thing?

So let’s pretend we agree to this Warren Buffett plan and increase taxes on those people making $1 million a year or more. Great. We’ve solved the problem right? Budget balanced! Crisis averted!

Well, actually, we’ve only fixed about 3% of the deficit. Looks like we’re going to need another 97%.

So when the media tries to tell you that taxing the rich would fix the debt crisis, they are either woefully uninformed or lying to you. Warren Buffett isn’t proposing we raise taxes on the rich because it would solve our problems; he thinks we should do it because it is fair.

If it were up to me, I would fix this whole thing by implementing a flat tax. No tax loop holes. No social engineering. No special tax rates for capital gains (which is obviously and blatantly a way to reduce the tax burden on the wealthy). Basically, I would implement the Fair Tax. We all pay exactly the same, and we all get a prebate of a certain amount every year to make it a progressive tax system that is fair to low income folks.

It’s a pretty incredible solution and is where I plan to take the country when I’m president in 2032.