The best part is, I still have more unrealized gains that are waiting to be sold at the right time. How did I do it?

If you are unfamiliar with options, it is a pretty simple concept once you understand it, but it can be hard to wrap your head around the concept at first.

When you buy a call option (called a contract), you make a deal with another person that he or she is obligated to sell you 100 shares of a stock at a certain price (the strike price) on or before a certain date (the expiration). Clear as mud right?

You can watch this short video for an explanation. It will help, but I think there’s an opportunity to explain it better. I’m going to make a video on this options soon, but in the meantime you’ll have to live with this one.

Here’s a true story of how I used options to get a return of almost 100% in about four months:

It was a brisk Thursday morning on September 23rd, 2010. I had a feeling something good was going to happen that day. Maybe my girlfriend was going to take me out to lunch. Maybe I was going to get a promotion or a raise at work. Or maybe I would get a call from a major record label asking me to sign a multimillion dollar contract to sing personal finance songs.

It was even better than all of those things combined.

Then C started rising. On October 1st it was $4.09 and my option was in-the-money (above the strike price) with well over a year left to run.

On October 13th it was all the way up to $4.25. Talk about an early Halloween present!

On November 5th, Citi hit $4.50 and I celebrated with a huge glass of chocolate milk!

Then on December 6th, a stock market angel in heaven must have gotten his wings because the US government announced they had sold all of their shares in Citi. The bank had paid back all of its TARP funds and was no longer under the government’s thumb. C jumped from about $4.50 to $4.80 in days.

Feeling incredibly smug about my purchase only a few months ago, I let the stock continue to rise until January 14th. With Citi stock trading above $5.10 a share, my option was now trading at $1.42. My dollar cost average was $0.72 and I had been holding out for $1.46 and a 100% gain. The was a noticeable odor coming from my armpits as I watched the option trade just below my target price.

I made $807.87 trading options, and still have more options waiting to be sold at a gain in the future.

I didn’t tell this story because I wanted to brag about how I made a good investment. Lord knows I could tell an equally elaborate story about how I’ve lost money in the market too. (which I’ve already done and will be posted tomorrow, so stay tuned!) I told this story because I wanted to show how much fun trading options can be, and how it can increase your returns as opposed to trading common stock. 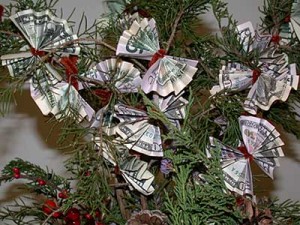 Money does grow on trees. If by trees you mean call options.

I only recommend trading options if you are very confident in the company you are purchasing. If that stock doesn’t go up big, you’re probably gonna lose money and could very well lose 100% of your investment.

If you trade options, leave a comment below and let me know about a big win you’ve had (save your big losses for tomorrow when I share mine).