Last week I wrote about how amateur stock picks and even random stock picks have outperformed expert stock picks since January 2012. It is one of the reasons I don’t trust the stock market.

I realize this is not a popular opinion. Talk to any financial advisor or even your parents or grand parents, and they will tell you that I’m an idiot and the stock market is not only perfectly safe, but it’s the key to being wealthy.

Of if you don’t want to talk to them, you can talk to Robert.

Robert is a reader of my blog and he laid out his argument for investing in the stock market in the comments. It’s the same argument you’d hear from almost anyone who holds a traditional view of the stock market.

At the end of Robert’s comment, he said “I welcome debate…” and I’d like to take him up on that offer. And just for fun, I’m going to use logical fallacies to demonstrate where his argument doesn’t hold water.

So get out your LSAT prep books and come with me on a journey of logically debunking a stock market traditionalist. All definitions of informal fallacies below come from Wikipedia.

An Argument from Ignorance (We Don’t Know the Future)

If you invest in a diversified portifolio for > 10 years (which is the target audience for this blog) then stock equities are your best way to build wealth as a young person. I agree stock picking is gambling. Market timing is gambling. Investing in the overall health of an entire index (US, international) is NOT gambling. You diversify your risk over a huge number of companies. You WILL see ups and downs, but overall you will see growth over the long term, particularly if dividends are reinvested.

I could say I think investing in Gold is the best way to build wealth as a young person. He would tell me I’m wrong. I could show that GLD is up 216% in the last 10 years and the S&P 500 is only up 75%. He could tell me that was a fluke and won’t happen over the next 10 years. 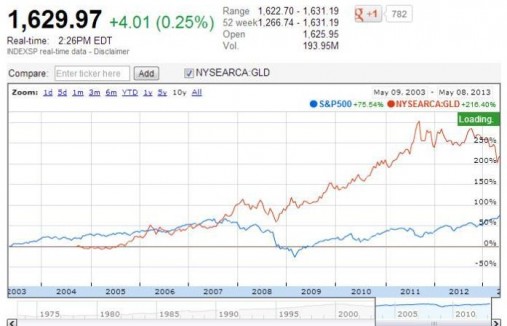 We are all ignorant of the future, so anyone can make a claim about the “best” way to build wealth in the future. It can never be proven wrong today; only when the future comes.

Imagine if we were having this discussion 10 years ago? People who listened to me about gold would be much better off than people who listened to Robert about the stock market. Clearly his “best way to build wealth” wasn’t truly the best way over the last 10 years, and I don’t think it will be in the next 10 years either.

A False Analogy (Paper is Not the Same as Rock)

You do also realize that your “safe” securities of gold and real estate are susceptible to the same market forces and speculation as stocks. They might be “real” things, but so are microsoft and apple and the share of ownership that I own in those companies.

Here is a good example of a false analogy, which is defined as an argument by analogy where the analogy is poorly suited.

A share of stock is essentially a number in your brokerage account. Some people even take possession of stock certificates, but that little piece of paper is as tangible as it gets.

Gold, I admit, may not have much practical value. You can’t eat it if you’re hungry and you can’t use it to keep you dry in a thunderstorm or warm in the winter. However, for at least 2,500 years it has been valuable and I haven’t seen anything to change that.

For thousands of years people have been able to use gold and silver to barter for or purchase things with practical value. I could be wrong, but I don’t expect that to change any time soon.

In gold and real estate, you own something tangible that is more valuable than a piece of paper. In stocks, you do not.

A False Dilemma (More than One Way to Skin a Cat)

The author should wholeheartedly acknowledge that this is not sound investment advice. The “thousandaires” this blog advertises to will stay “thousandaires” by following this strategy into their 40s 50s and beyond.

This is a great example of a false dilemma, also known as a false dichotomy. A false dilemma is when two alternative statements are held to be the only possible options, when in reality there are more.

Anyone who tries to scare you into thinking there is only one way to be financially successful is not someone I recommend taking advice from. This world is too complex to be seen in black and white.

I welcome debate, but “I’m scared of the stock market” is emotional garbage. Data is key. The historical data says investing in a risk designed diversified portfolio over the long term outperforms other investments.

Retrospective determinism is the argument that because some event has occurred, its occurrence must have been inevitable beforehand. Robert is arguing that because the historical data shows that the stock market has gone up over a long period of time, that it MUST have gone up. Thus, it MUST go up again in the future.

The Stock Market Isn’t the Only Way to Build Wealth

After logically refuting all of Robert’s points, I’m ready to defend my position, which is the following:

I’m going to try to get rich by purchasing precious metals, real estate, and investing in my own small business ideas. In the meantime I’m going to work hard at my day job and do everything I can to increase my income.

I strongly believe that I can and will become very wealthy with this method. I also understand that other people may get better returns in the stock market than I can get with my method. I don’t think that will happen, but it is certainly possible.

People can get rich any number of ways, and at Thousandaire I like to write about some more non traditional ways to approaching wealth generation. If you don’t like it then feel free to stop reading, but do not tell me I’m wrong or I’ll lawyer you like I did Robert.