My Mom’s Cancer is Back

I just spent an awesome 8 days in St. Louis with my mom and the rest of my family. It’s funny because usually I’m feeling ready to get home after about 3 or 4 days, but this trip was much longer and yet when we were leaving it felt like we had just arrived.

Little did I know that the whole time I was there my mom was waiting on some test results from her oncologist.

She finally got the results the day after we left, so I got a phone call. Her cancer is back.

For those of you who have been reading this blog for a while, you probably know that my mom was diagnosed with Stage III ovarian cancer almost two years ago. She had a big surgery and had to deal with multiple rounds of chemotherapy, but the doctors finally felt like they got it all.

Here we are, less than a year after her last chemo treatment, and she’s about to go back for another 6 months of it.

I Don’t Know What to Feel or Think

When my mom first called and told me that she was going to have surgery because the doctor thought she had ovarian cancer, I was devastated. We had no idea if she had cancer at all. Even if she did, we didn’t know if it was Stage I or Stage IV. I was very upset, but also hopeful.

When the doctor did the surgery and told us that he removed most of it and could get the rest with chemotherapy, I was relieved. I knew my mom was a fighter and would handle the chemo like a champ. I knew she would come out on top, and she did.

Knowing my mom had Stage III ovarian cancer was actually pretty easy because I knew she would beat it.

But now it’s back.

And now I have no idea what to think again.

It hasn’t even been a year since her treatment stopped, and it’s already back. If they get all this stuff, do we have any reason to believe it’s going to stay away? I have no idea.

I’m feeling helpless right now, and it just hurts to think that my mom has already been through so much and she will have to do it all over again.

I Had to Do SOMETHING

My mom has a great oncologist, and I trust that his plan will get rid of this cancer again. I’m just worried about it coming back again later. I’ve always been a believer that we have amazing bodies that can do really amazing things with the right raw materials. I decided to do some research, and I found that there’s a good chance your body needs selenium to fight cancer. 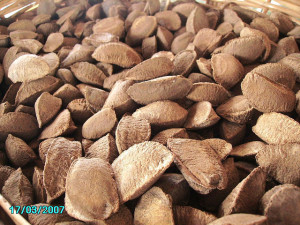 Here’s an article from a website called Natural News talking about the benefits of selenium. I then found an entry on selenium from the American Cancer Society website that says:

Selenium shows promise as a nutrient that may help prevent the development and progression of cancer, but more research is needed.

That’s good enough for me. The best part is that my mom doesn’t even need to take a supplement to get a bunch of selenium. There is a ton of selenium in Brazil Nuts. All she has to do is eat 2 or 3 Brazil Nuts a day and she’ll get more than enough selenium to hopefully help fight off this cancer.

I just ordered 3 pounds of Brazil Nuts and had them shipped to my mom. She promised me that should would eat a couple every day.

I don’t know if this will help, but it certainly can’t hurt.

And at least I feel like I’m doing something. My prayers are good, but hopefully these nuts help as well.

Please Pray for My Mom

If you’re religious, please send my mom some prayers. She had a bunch of people praying for her last time, and I know that gave her a lot of strength. Thank you so much for your thoughts and prayers for my mom.