How To Host a Frugal New Year’s Eve Party 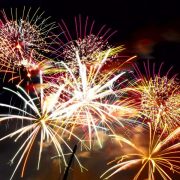 Here are some suggestions on how you can host a New Year’s party frugally.

People are fairly accustomed to parties where guests bring their own booze, especially for the occasions that typically involve the most drinking.

If you’re self-conscious about seeming like a cheap host, you could find a middle ground and provide champagne for the toast at midnight.

Another option would be to provide non-alcoholic beverages, which are usually cheaper than wine and spirits.

As long as you’re asking people to bring their own booze, you might as well ask them to bring food too. You could make it a potluck and have everyone bring food, or just ask your friends who are good cooks to bring stuff.

If you don’t plan your party as a potluck, then you might instead set a later start time for the party. The less time your party lasts, the less food you’ll need.

You might tell your guests the party is intended to start after dinner so they’ll take the hint and arrive with less of an appetite. Then you only have to serve light snacks.

New Year’s themed decorations and party favors tend to be more expensive than for other occasions — except for when they go on sale immediately following the holiday. Set a calendar reminder for yourself to buy to buy decorations and party favors during the week following the holiday. Otherwise, try to forego them this year or obtain them in moderation.

Another way to save money on decorations: Use ones that apply to any holiday since you don’t need really need written reminders that it’s New Year’s Eve. You could even string Christmas lights around the room.

Don’t let money worries interfere with your enjoyment of the New Year holiday. Remember that the kinds of things that usually make a party fun are often free. It’s often as simple as who you invite and what kind of music you play.
What are you planning to do on New Year’s Eve this year?
Spread the love
By Jackie Cohen|December 28th, 2017|Categories: Personal Finance Tips|Tags: New Year's Eve|Comments Off on How To Host a Frugal New Year’s Eve Party