Paul Ryan is a Fiscal Liberal

If you’ve listened to 37 seconds of Rush Limbaugh then you’ve surely heard him criticize Barack Obama for being a socialist.

So if Republicans like Mitt Romney and Paul Ryan believe that Barack Obama is destroying America by increasing federal spending to $3.603 trillion, surely they would have a budget proposal that would reduce federal spending back down around George Bush levels. Right? 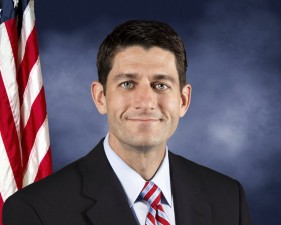 We aren’t that stupid.

There is a difference between liberalism and conservatism, and it’s not $0.1 trillion dollars.

The same Republicans that were clamoring for Cut, Cap and Balance (which would have included a constitutional amendment that would require the federal government to eliminate the deficit) have submitted a budget that still has a $384 billion dollar deficit in the year 2021 and NEVER eliminates the deficit.

It’s very simple: If Barack Obama is a fiscal liberal (which I doubt anyone disagrees with), then so are Mitt Romney, Paul Ryan, and all the Republicans who support the Paul Ryan budget.

There is a True Fiscal Conservative Option

Forget Republican or Democrat. If you believe in fiscal responsibility then you have two options. One is a true socialist society where taxes are raised so outrageously high that tax revenues are brought up to meet current spending levels. Considering this is America, this is not a real option.

The only way to get our deficit and debt under control is to pass the Ron Paul budget or something very similar. Both the Republican and Democrat plans are just slight variations of the same exact liberal spending policies that are destined to destroy this country if they aren’t fixed.