This month is going to be a doozy of an update. Here are a few of the things that happened last month: 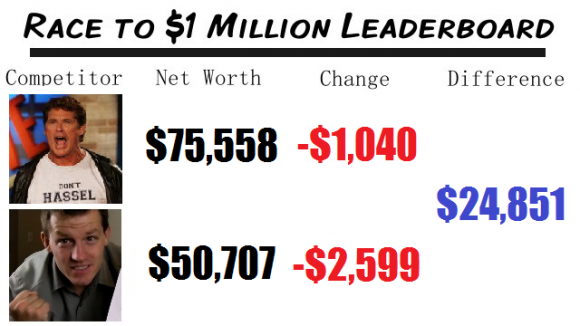 I Won’t Be Catching Up This Year

So I had this crazy idea that I might catch up with The Hoff this year. I thought maybe because it is a no-donation year and because I’m starting to make a little size money that I could make up enough ground to catch him. It sounded like a good idea back in January.

Now I’m 5/12ths of the way through the year and I’m over $2,000 worse today than I was on January 1st. So much for his “expensive wedding” helping me catch up.

I’m Sick my Net Worth Going Up Slowly

Some people might call me crazy for being upset with my net worth increasing $20,000 in the last year. Sorry, but that just doesn’t cut it for me. Let’s look at some of the facts:

Let’s look at some of the expenses I’ll incur over the next 10 years or so:

The point I’m trying to make here is that I expect life to get more expensive over the next 1, 2, 3, 5, and 10 years. Sure I’ll probably get a small raise every year, and probably a promotion every few years or so, but my “back of the envelope” calculations seem to show that any increase in income is probably going to be offset with an increase in expenses.

Sure, if I get married and my wife has a job then her income is obviously going to help, and as my investment portfolio grows I can get more and more interest every year, but I’m pretty sure I’m still looking at my mid-40s before I get to $1 million.

Right now I’m looking at my mid-40s before I have $1 million in net worth. If I start living a crazy frugal life, I might speed it up to my early 40’s. That’s still VERY far away. I want this to happen sooner.

So as I’ve alluded to many times before, I’m spending all my free time building a new website. The new site is not like Thousandaire, which is purely content. It is a very useful, very unique, very free service that is going to TAKE OVER THE INTERNET.

Okay, it might not take over the internet, but I do think it will create a substantial secondary stream of income.

My Net Worth Tracking

As always, here are the net worth tracking graphs I use in my customized Net Worth Tracking Spreadsheet that is free to download. It’s fun to track this stuff, especially when the numbers are going up like mine have been!

I won’t be pulling even with The Hoff this year, but at least I can show a big fat ZERO in the student loan line (blue installment line in the debts graph) and hopefully get more income from my new site! Wish me luck!