Race to $1 Million – May Update

Another new month means another update to the Race to $1 Million. If you are unfamiliar with the contest, I am racing my friend and stock picker The Hoff to $1 million in net worth. Every month I provide an update of where we stand and discuss a few ways that I can get to $1,000,000 faster.

Last month, The Hoff pulled a rabbit out of his hat and came up with about nine thousand dollars of a net worth increase. I’m convinced he’s selling drugs, but until I come up with evidence, I can’t go to the cops. Some people might say a huge tax return and a 401k match were responsible for his big gains last month, but I’m not buying it. In fact, I’m pretty sure The Hoff knows I’m trying to bust him for drug dealing because this month he seems to have put his highly profitable side business on hold. Without his second income, I slightly kicked his butt this month.

I’m going to need to start getting more aggressive if I want to catch up. It’s bad enough that I’m already over $25k in the hole, but it’s worse when I’m not making up any ground. I’ve looked over my budget for the first four months of the year, and here are a few places I’ve found I can save some money: 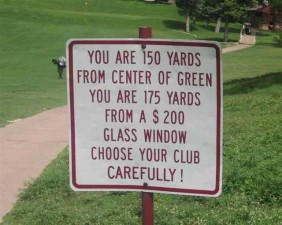 There has never been a bigger waste of money in the history of the world than the game of golf. It’s expensive to buy equipment. It’s expensive to practice. It’s expensive to play. It’s expensive to take the governor off your golf cart, crash it, and pay for the damages. Basically, there is no way to have fun with this game without spending boatloads of money. I spent $283 on golf in the last two months, and I’m going to cut back in the coming months. I’m just hoping it gets unbearably hot in Dallas soon so I have a reason to stop playing golf and spending all my money on golf balls and plaid pants.

Going out for lunch and/or dinner has always been a problem for me. I’m not a good cook and I don’t enjoy leftovers, so it is very hard for me to cook for myself. However, I’ve found recently that the amount of crappy food I’ve been eating is taking a toll on my body. Let’s just say the past few weeks have taken me back to my Chili Cheese Burrito days. In the last four months, I’ve spent $150, $169, $251 and $192 on eating out. That’s an average of about $190 a month, or over $6 a day. If I can bring this down to about $100 a month, I’m pretty sure my wallet and my stomach will thank me.

Extort Money from The Hoff

This wouldn’t actually save me any money, but it would definitely improve my standing in our race. Here’s my plan. I’ll go to his house when he’s not there and lure his girlfriend outside by pretending to sell girl scout cookies. I will kidnap her and then go into his house and put a Barbie doll in the bed where she usually sleeps. I’ll attach a note that says, “I’ve turned your girlfriend into a child’s toy. If you want her to return to her original state, send $57,312.00 to [insert offshore bank account]. Sincerely, The Wicked Witch of the West”. I think it’ll work.