One of my student loans is gone!

I’ve stated before that I’m not comfortable with investing in the stock market right now. There’s too much global uncertainty, and it doesn’t make sense while I have a bunch of debt to pay down.

I took my first step towards paying that debt off when I paid off a student loan worth about $4,700 at 5% interest. It wasn’t exciting. It’s not going to make me rich. It’s just a guaranteed 5% return on my investment and an increase of $63.64 of cash flow per month.

Now my student loans are down to $15,753.68. I would like to have all of them paid off by my 27th birthday, which happens on May 4th, 2012. Is it going to happen? Who knows. I’m not the kind of person who sets a goal and then drives towards it no matter what. I might have an idea for a business that needs $15k, or maybe I see an opportunity in the stock market that I want to take a chance with.

If I can make more money by investing it elsewhere, then I will. If not, then I’m paying off student loans.

With all that being said, let’s see if paying off my student loan helped me in the race this month: 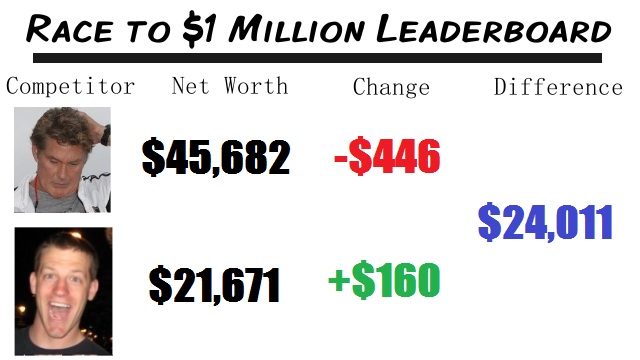 I’m happy to see my net worth rise this month after the beating I took last month, but this clearly isn’t moving as fast as I’d like. If my net worth were to increase $160 every month from now through eternity, it would take me another 6,115 months to make it to $1 million. That means I’d hit $1 million at the age of 535.

I’m hoping to start moving a bit faster in the coming months. Here are a few reasons for optimism:

Here are some reasons for pessimism:

Maybe I’m being overly positive, but I think there’s a good chance I start making violent upwards moves in the next few months. Christmas travel is going to be very cheap thanks to using rewards flights. The trip to Italy will also be pretty cheap because I’m using the miles I got from my Chase British Airlines Credit Card. Both trips won’t be free, but they’ll be a lot cheaper than they could be.

And as far as The Hoff is concerned, he has a wedding to plan and pay for. He’ll probably declare bankruptcy in the next year or so.