Save Money on Taxes by Getting Married

Save Money on Taxes by Getting Married

A nice side benefit is saving a lot of money on taxes next year.

When one person makes substantially more than the other person in a relationship (which is my situation with my future wife) then getting married saves a boatload of money on taxes. Let’s run some numbers and see just how much getting married could save us next year.

I don’t discuss my annual salary on this website, but for the sake of argument let’s pretend my future wife and I make $73,801 in taxable income this year (in 2014, meaning we are using the 2015 tax brackets). That means our actual income would be higher but after things like our deduction, 401k contributions, HSA contributions, and more, we end up with $73,800 in taxable income. 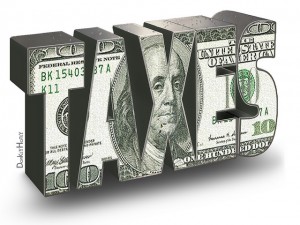 If I were single with $73k of income, I’d be in the 25% tax bracket. In fact, every dollar I earn after $36,251 would be taxed at 25%, meaning the government gets a quarter for every dollar (plus 7.6% in social security and medicare, but we’ll ignore that for now).

However, as a married couple, $73k means all our income is taxes at a maximum of 15%.

Of course this is an oversimplification that assumes the taxable income is the same both pre-marriage (1 income) and post marriage (potentially 2 incomes). However, the point I’m trying to make here is that getting married generally lowers you tax bill.

This situation works great for a couple where one person stays home to raise children or is in school. However, it gets much more complicated when both people work.

If two high-earning individuals get married, there are situations where their combined tax bill would actually result in them paying more taxes than they would have if they remained single.

This again, is a very complicated subject due to the complex nature of our tax laws. There is an article on US News that explains the marriage tax penalty that I recommend you look at if you are about to marry someone and both of you earn a lot of money (over about $75k each).

If you really want to know the impact of getting married on your taxes, there are really only 2 ways to do it. Either use the IRS tax forms and worksheets to calculate your taxes, both as single people and as a couple and compare the two, or talk to a tax professional like a CPA.

Marriage doesn’t only change a couple’s tax brackets, but also the amount of their standard deduction and other variables. Of course, if kids are in the future, those little guys and girls can significantly reduce your tax liability as well (although they also dramatically increase your household expenses).

To My Married Readers: How did your tax bills change after you tied the knot?