She Didn’t Want a Promotion

One day I was at a party with a good friend of mine and a lot of people I didn’t know. I overheard a conversation at the next table (not intentionally I might add. These ladies were loud!) about their jobs.

One of the ladies proudly announced that she was offered a promotion at work. Her friends congratulated her and told her how great she was for doing so well at her job. After greedily accepting her congratulations and basking in her glory, she finally let everyone in on a little secret.

“It was so flattering that they wanted to give me a promotion, but I just couldn’t accept the position.”

I was touched. There are many things in this life that are more important than money. Where a lot of people would jump at the change to get a raise, this girl weighed her options and determined that a promotion wouldn’t allow her to maintain the quality of life she wanted.

There are so many good reasons not to take a promotion. She may have children and didn’t want a new job to distract her from being a mother. Maybe it requires travel and she couldn’t bear the thought of being away from her family. Maybe she just loved her current job so much that she couldn’t dream of doing anything else. I couldn’t wait to hear what was more important than making money.

“If I make any more money, I won’t qualify for food stamps anymore.”

Then she took another drag of her cigarette, popped open another beer, and spit in my face.

OK, she didn’t spit on me, but it felt like it! Even though I was only working part time (this was back in my college days), I was a hard-working, taxpaying American. I couldn’t have been more angry if she had walked right over to me, grabbed my wallet out of my pocket and directly stole my money.

Not wanting to cause a scene with a complete stranger, I figured I would just let her friends handle the situation and tell her how she’s being stupid and selfish.

Once again, my faith in strangers was severely misplaced.

Each one of the other three girls at the table congratulated her on how smart she was. “Good for you! There’s no reason to work harder if they are just going to take away your benefits!” “You already work hard enough; you don’t need any more stress in your life.” Etc. Etc. Etc.

I stood up and told my friend that we had to leave immediately. It seemed government dependence was contagious at this party and I didn’t want to catch it. 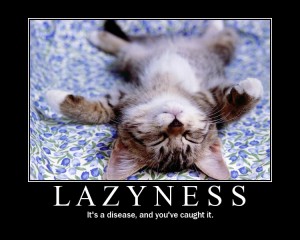 This cat was even too lazy to spell "laziness" correctly

There are two parties at fault in this situation. The first, and most important, is the lazy girl. Being on government assistance should never be a choice. Have some pride and pay for yourself; don’t make me and the rest of the taxpayers do it for you.

Minimum wage in Missouri at the time was $6.65 an hour. That means in a 40-hour work week, she should have been making at least $266 a week. If that isn’t enough, well, work more. Or take a second job. Or take a promotion!

Sure, working your butt off might be hard. It might suck. I don’t care. And neither should the government. It’s not the government’s responsibility to give you a life of luxury.

How do you feel about this girl? Does this make you as angry as it makes me? If so, are you more angry with: the girl who declined the promotion, or the government who provides her the opportunity to be a lazy pile of cow dung?