So That’s Why Taxi Rides Are So Expensive!

We here at Thousandaire pride ourselves with introducing alternative and unique investment opportunities.  A quick Google search will reveal thousands of articles and blogs analyzing ExxonMobil or BP, but only Thousandaire will show you how to buy 14 years worth of gas for a flat up-front fee.  Every day there are millions of new opinions on which company will win, but only Thousandaire will show you ways to invest in some non-traditional asset classes with great returns.

Today we’ll introduce you to one more non-traditional asset class…Taxis.  No doubt this stock pick was influenced by my recent trip to New York City (which will be reflected in this month’s Race to $1 Million).  When I see billions of yellow cabs on the road (actually only 13,237) and every single cab is full, I don’t see a bunch of yellow cars; I see dollar signs.  This is especially true when you consider that my short cab ride to the airport set me back $50.  Let’s take a look at where all of this money goes.

A taxi medallion is a way that cities can regulate the number of taxis on the street. A medallion is sold by the city and is a license to drive a cab (similar to a small business license).  The number of medallions is usually capped by the city and the limited supply can easily drive up the price (to nearly a million dollars per medallion in NYC). This means a prospective cab driver will first have to pony up a million dollars before taking on his first fare. 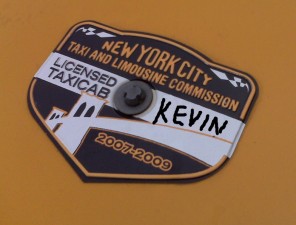 Most folks don’t have this kind of cash lying around, so they take out a loan to purchase the medallion or they lease a medallion on a weekly rate. Medallion Financial Corp engages mostly in providing loans to purchase medallions and collecting the interest (and giving it to investors in the form of a 7.5% per year dividend).

The genius part of this business plan happens when people don’t pay. Most people are aware of the lengthy and costly process for a bank to foreclose on a home when the customer stops paying his loan; taxi medallions are the exact opposite. The repossession process is as simple as having the repo man take the medallion off the hood. The resale part is just as easy, as these medallions are a commodity product and are always in high demand. In fact the medallions have gone up in price every year the past 10 years (almost 15% per year).

Before investing in a heavily regulated industry, make sure you take a look at the effects of regulation changes. The price of medallions stays high because of the limited supply. If a city decides to issue more medallions in order to balance their budget, this could have a drastic effect on medallion prices. The nice part about Medallion Financial Corp is that the impact would be somewhat dampened as they do not directly invest in medallions, but only provide medallion financing.

I currently do not have a position in this stock and do not plan to do so for the next 90 days.

One of my favorite things about reading personal finance blogs is that I usually get to learn something new. It’s even better when I learn something new on my own website. I had no idea taxis we regulated so closely, and never even dreamed about investing in taxi medallions. I would like to do a bit more research into this industry and how it works, but this sounds like an incredible opportunity! Plus, now I know why the cabbies in NYC are all so angry; I’d be pissed too if it cost me $1 million just to show up to work.

Important to note that ALL ideas, thoughts, and/or forecasts expressed or implied herein are for informational and entertainment purposes only and should NOT be construed as a recommendation to invest, trade, or speculate in the markets.