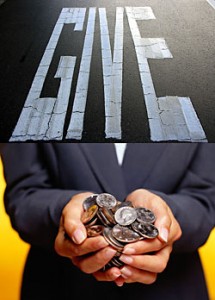 You know what that did for me when I started filing my taxes? Nothing. You can itemize deductions, but it only benefits you if your itemized deductions total more than the standard deduction, which was $5,700 that year. I got the same tax benefits as someone who didn’t donate a penny of their income.

It doesn’t bother me that I didn’t get a tax benefit. I donate the money because I believe in the cause, not because I expect the government to reward me financially. However, I’ll take any tax benefit I can get.

When I was about to start donating money this year, I had a revelation in the form of a math equation:

That puts me dangerously close to the standard deduction. I’m not ready to double my religious donations, but I am ready to take a year off, and then donate twice as much the next year.

I actually make a little more now than I did in 2009 so I plan to increase my donation by $50 a month, and then double the total donation to make up for the missing year. That means I’m donating:

No one knows what the standard deduction will be in 2011, but I should be either above it or very close. Then, depending on if I have other deductions to itemize, such as home mortgage interest (I don’t own a home yet but might), medical expenses, or state taxes, I could get a decent tax break. For example, if I can itemize and be $1,000 over the standard deduction, then in the 25% tax bracket I’ll save $250.

This is a great plan on paper, but I see two issues that may bother people right off the bat.

First, this only works if you are committed to following the plan. Giving $6,000 to church in one year is a whole lot of money, especially for a 25 year old young professional. Some people may be tempted to skip a year and then go back to their original giving instead of doubling it in the second year. Second, due to the time value of money, which basically says “a dollar today is worth more than a dollar tomorrow,” the Church would much rather have the money this year.

Is it morally objectionable to strategically donate money so as to receive a tax break? Leave your comments below.