At the beginning of the year I decided to do a stock market experiment to see if randomly picking stocks is better or worse than expert picks. And to make it more interesting, I added a few more “funds” like a collection of stocks picked by personal finance bloggers, some I personally picked for Tag, and more. 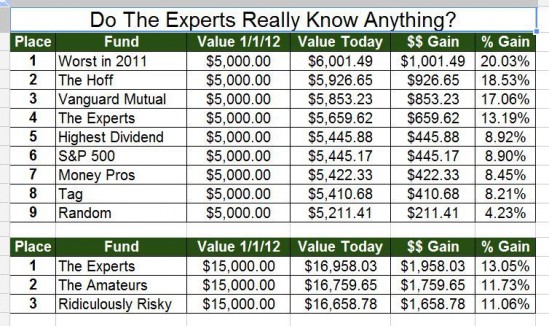 So what have we learned so far? Yes, three months is kind of a ridiculous amount of time to start drawing conclusions, but I’m going to do it anyway ’cause I’m a rebel like that.

I didn’t actually need to conduct an experiment to figure this one out, but the data so far makes a strong argument against picking stocks at random. While eight of the nine categories has a return of at least 8% so far, the random group of stocks is sitting at just over 4%. I actually thought Random might do well since a part of me believes the entire stock market is a crap shoot. I guess doing your research does actually make a difference.

While Random is sitting in last place, Tag (my girlfriend’s portfolio!) is next to last. If you don’t remember from before, I created Tag’s portfolio using ETFs to diversify her investments while still being able to target a few specific investment areas. So if she’s in second-to-last place, why am I proud of her performance?

Her investments are actually doing exactly what they were intended to do: stay pretty close to the S&P 500 and pay low expense ratios. She’s within 0.6% of the S&P 500 so I’ve done my job. If she were looking for aggressive growth, we would have invested in some individual stocks and higher risk ETFs. She’s right where she should be with this strategy.

3. The Contrarian School of Thought is Looking Good

I had a personal finance class in college where the teacher told us to buy huge companies when their price is depressed because it just means they are on sale. This is called contrarian investing. The Worst in 2011 bought the 10 biggest losers in the S&P 500 last year and is leading the pack so far. Four of the ten stocks are up over 40% already on the year.

But this also has a lot of risk. The two worst performers are down 23% and 38%. The lesson here is to take a deeper look into companies that have dipped in price. There’s a big difference between a temporary dip and a fundamental flaw in the company. Figuring out which one is causing the dip can help you determine if you should buy or sell.

4. The Hoff is Much Better This Year

The Hoff’s picks last year were pretty crappy (at least last time I checked. Maybe they turned around…)

This year he’s sitting in the number two spot with his 12 stock picks for 2012. His advice: buy what you know. It seems to be good advice so far, and we’ll see if he can continue to outperform the S&P 500 by more than 100%.

Readers: We have a full nine months until we declare a “winner”. Who do you think will win? Remember, the full list of companies and their performance can be found here.