The Constitution Wants Obama and Democrats to Negotiate

Here’s my hot sports (politics) opinion: Barack Obama is being absolutely ridiculous by refusing to negotiate with Republicans on the government shutdown (and soon the debt ceiling as well).

As most of you know, I’m a libertarian and I strongly dislike the policies of almost every president and congressmen that has been elected in my lifetime. I don’t pick sides between Republicans and Democrats because I think both parties support terrible policies. 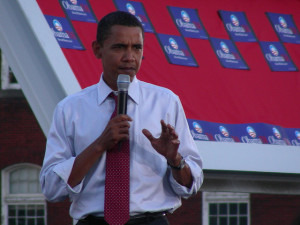 I’m not going to get into the specific policy disagreements (aspects of Obamacare) that are preventing the two sides from coming to an agreement. I want to address how the president of the United States refuses to engage in political negotiations to end the government shutdown. A lot of websites give slanted views on things, so I like to link you directly to the source. Here is Obama talking about the negotiations.

My summary is this: Obama and Democrats are willing to negotiate only after the budget is passed and the debt ceiling is raised.

Let’s talk about history for a moment. Government shutdowns are not new. In fact, the government shut down many times when Ronald Reagan was president and the speaker of the house was a Democrat. In each of those shutdowns, Reagan and the Democrats engaged in good faith negotiations and came to a deal everyone agreed on.

Someone might say, “Just because this has happened before doesn’t mean it’s right.” I would refer these people to the United States Constitution as opposed to some commentary by Chris Matthews or Sean Hannity.

This Debate Was Planned over 200 Years Ago

Article I, Section 9 of the United States Constitution states, “No Money shall be drawn from the Treasury, but in Consequence of Appropriations made by Law”.

As you can see, the law of the land gives Congress (the branch that makes the laws) the explicit power over deciding how the federal government spends money. This is NOT the power of the president, the supreme court, or commentators on MSNBC or Fox News.

A government shutdown is not some unintended consequence of a poorly thought out system of government; it is an important and essential part of ensuring the government represents the interests of the people.

If our founders wanted any law that was passed to be automatically funded, they could have easily placed that into the Constitution. They did not. Passing a law is one action. Passing an appropriations bill to authorize the government to pay for that law is an entirely separate action. This was all intentional.

And if current lawmakers think appropriations bills are unnecessary they can amend the Constitution. They haven’t done that yet, so they need to abide by the document that they swore an oath to uphold.

Obama and the Democrats Need to Grow Up

Our government was founded on the principle that we have a debate over which laws deserve to be funded. Congress and the president should do their jobs, negotiate in good faith, and get the job done.

Every one of the politicians in Washington took an oath to uphold the Constitution. The Constitution demands that an appropriations bill is passed, and passing any bill requires negotiation. Refusal to negotiate is refusal to do your job.

You can blame both Republicans and Democrats for eventually passing a really crappy appropriations bill that will increase our national debt by another $1 trillion or so next year. But you can blame Democrats and Barack Obama for not getting it done sooner due to their refusal to negotiate.

Readers: Who do you blame the shutdown on?