The Pope and Economics

I had a reader ask my opinion on the Pope and his latest remarks regarding the economy. I don’t want to put words into anyone’s mouth, so I’ll present the question as it was written:

Hi Kevin! I would love to get your take on the anti-capitalist remarks made by Pope Francis! Do you think you could do a post on this?

I am not only a Catholic, but also someone who believes wholeheartedly in a free market economy. This seems to be right up my alley. 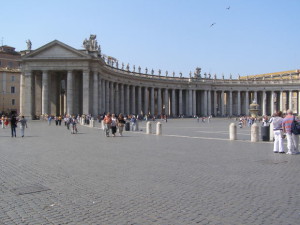 My first thought in writing this post was that I should do some research.

No, that doesn’t mean looking at what Fox News or MSNBC had to say about his comments. I wanted to read the full statement from the Pope himself. The part regarding economics starts at #50. This way I was able to react with my own thoughts and feelings without being influenced by the commentary of these theoretically unbiased news organizations.

There are a few specific quotes I want to address from that statement.

The Pope Condemns Throwing Away Food

Can we continue to stand by when food is thrown away while people are starving? This is a case of inequality.

As a Catholic, I agree. The Pope is correct to condemn anyone for throwing away food that could be given to hungry people. I think it’s important that I, as a consumer, make sure to give my business to restaurants that donate food to shelters rather than throw it away at the end of the night.

In addition, I would imagine the Pope isn’t happy that the US Government spent over $2 billion in 2013 paying farmers not to farm. This is an old, stupid liberal idea that government control of prices (by controlling supply) is a good thing for the economy and the people.

This is, in fact, a bad idea not just for the interest of keeping peoples’ bellies full, but also in keeping our economy strong. As you can tell, this program has nothing to do with a free market, and everything to do with stupid government policies.

The Powerful Taking Advantage of the Powerless

Today everything comes under the laws of competition and the survival of the fittest, where the powerful feed upon the powerless. As a consequence, masses of people find themselves excluded and marginalized: without work, without possibilities, without any means of escape.

I’m sure a liberal would read this statement and consider the “powerful” the rich, and the “masses” the middle class and the poor. However, a rich person who starts a company and creates jobs is not excluding and marginalizing his workers; he is including them in the economy and production of valuable goods and services while paying those employees wages.

I read this and think it much more clearly describes the government, the bureaucrats, and the lobbyists who get their power not from money earned honestly, but from the backing of a multi-trillion dollar Department of Defense.

The masses, or normal people like me, are truly left without any means of escape from a government that wants to take 30 cents of every dollar I earn through honest work. In this sense, I completely agree with the Pope.

…some people continue to defend trickle-down theories which assume that economic growth, encouraged by a free market, will inevitably succeed in bringing about greater justice and inclusiveness in the world. This opinion, which has never been confirmed by the facts, expresses a crude and naïve trust in the goodness of those wielding economic power and in the sacralized workings of the prevailing economic system.

I agree complete with the idea that we should not express “crude and naive trust in the goodness of those wielding economic power.” Where the Pope and I probably disagree is our opinion of who holds economic power.

Large banks and insurance companies get bailed out by the government instead of being allowed to fail. The government has to power to make almost any law they want to either help or hurt any individual business or industry they want.

In a truly free market, it is not the rich or the government who wield economic power, but it is the consumer. The power rests in the hands of everyday people in a free market, and that’s how it should be in my opinion.

The Pope on Wealth Inequality

While the earnings of a minority are growing exponentially, so too is the gap separating the majority from the prosperity enjoyed by those happy few. This imbalance is the result of ideologies which defend the absolute autonomy of the marketplace and financial speculation. Consequently, they reject the right of states, charged with vigilance for the common good, to exercise any form of control.

In this statement, I believe the Pope is naive. I wish I knew of a country where the free market could reject the right of a state to exercise any form of control. If that country existed then I’d pack my bags and head there immediately.

I honestly don’t know what he is referring to here, because I don’t know of any place in the world where the state doesn’t have control over the economy. Secondly, he is also naive to think that people who work in government and are “charged with vigilance for the common good” are truly more concerned for the common good than they are for their own well being.

Being Catholic and Libertarian is a Great Combination

Here’s the bottom line on the Pope. He is not a politician; he is the leader of a religion. He doesn’t often give his opinion on politics, and when he does, he doesn’t say that all Catholics are required to share in his political beliefs.

I honestly believe the Pope and I have the same political opinions. Our only difference is that while he knows better than anyone that all men and women are sinners, he still believes that a few elected men and women have the moral fortitude and immeasurable intelligence to best run an entire economy. I believe that is best left up to a free market.

Both the Pope and I believe that we should have a government system that best promotes equality and free will, and we just have different opinions on which political system fits that description. Last year I read a great book called Free Is Beautiful: Why Catholics should be libertarian

. If you are Catholic (or any Christian denomination for that matter), this might be an interesting read. I recommend it.