I have a whole week off work so I decided to tackle a new DIY project: laying tile in my master bathroom.

I have already tiled my laundry room and it was pretty simple and cheap, so I was expecting a similar situation for my master bathroom. 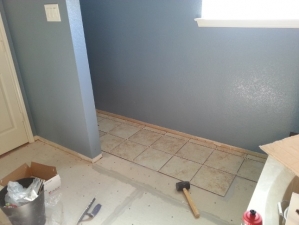 I was dead wrong.

Here are a few things that have seriously increased the cost of my renovation.

Cement Board is Almost More Expensive than Tile

When I did my laundry room, I was laying tile over a concrete subfloor, which means you can just lay the tile easily on the concrete. My master bathroom is on the 2nd floor, which means I’m laying it over plywood. That means I need cement board.

I didn’t realize I had to put mortar underneath the cement board (I thought I just had to screw it down). I bought pre-mixed mortar because I didn’t want to deal with mixing it and I thought one tub would be enough for the whole job. Laying the cement board over mortar doubled the amount I needed for the whole job. At $45 a tub, it increased my expenses by $45. Or so I thought.

The Mortar Bucket is a Liar

The bucket of mortar I bought says that I should be able to cover 130-160 square feet with one bucket. My master bathroom is only 100 square feet, so I thought 2 buckets would easily cover the whole job.

Well I’ve put down all the cement board and laid about 30 square feet of tile and I’m almost through my 2nd bucket. I’m going to have to buy a 3rd to finish the job.

If I had known I was going to need this much mortar at the beginning of the job I never would have bought the pre-mixed stuff. I was willing to pay $45 for the convenience of not mixing anything. That cost has now ballooned to $135. I probably could have gotten enough mortar mixing it myself for about $50.

Oh, and if you’re wondering I will be buying a 3rd bucket of pre-mized mortar. I’m so frustrated with this stupid bathroom that mixing my own mortar is just one more thing I’ll probably mess up and get angry about.

Baseboards are Not Cheap

Again, this is an expense I planned for, but I need to mention it because this is a significant expense. If you want to put the old baseboards back on, it’s going to be a huge challenge and they might not look as nice. The other option is brand new baseboards, which is either expensive for materials and time, or even more expensive to have them installed.

I have a great contractor that did the baseboards on the 1st floor, so Ill use him again after this job is done, but it’s going to cost probably a few hundred bucks to have the bathroom baseboards redone.

I already had a lot of tools I needed: a tile cutter, a tile saw, a trowel, a rubber mallet and a grout float. I didn’t have cement board tape ($5 a roll) or 3/16″ spacers ($5 a bag), but that was a pretty minor expense.

The point is that if you aren’t willing to commit to doing lots of DIY projects, you might almost as much money on tools that you’ll use just once than you would spend hiring a professional to do it.

I was hoping this project would only take a few days. I realize now that I’m about the slowest tile layer in the world and that I’ll probably need the rest of the week to make it happen.

This is just another example of where they say to estimate your time and costs, then double it. This project fits that description just about perfectly.

Readers: Do you have any tips on saving money on DIY projects?