To Make Money Honestly is the Highest of Virtues

I was a General Business major during the first semester of my freshman year of college. At one point during that semester I thought to myself, “40 years from now, I don’t want to look back on my life and say ‘I made a bunch of money’. I want to say I helped people and made a difference.”

I changed my major to Math Education.

Later in college, I decided to change my major from Math Education to Math and Electrical Engineering (my eventual degrees) because I didn’t want to teach and I thought I could accept the “evil” of making money as an engineer until I had enough money to start my own business, at which point it would be “good” to hire workers.

Throughout most of college, I had this crazy idea that it was morally right to work for others (teaching or hiring others) but morally wrong to work for myself (make as much money as possible).

To Make Money is Virtuous

When I graduated college and started working, my views had changed. If someone is willing to pay me to perform a service, that means I am helping to produce a valuable product or service. By working, I was actually creating wealth for the people around me where there was none before.

The fact that someone is willing to pay me to do my job is proof that my work is valuable to at least one person (the person who hired me). And if I work for an honest company that provides a valuable product or service that others are willing to pay for, I’m creating value for all of the company’s customers as well.

When I was younger, society taught me that making lots of money is greedy. Now that I’m older and (hopefully) wiser, I have realized that making money, or generating wealth, is the most virtuous thing I could do with my life. 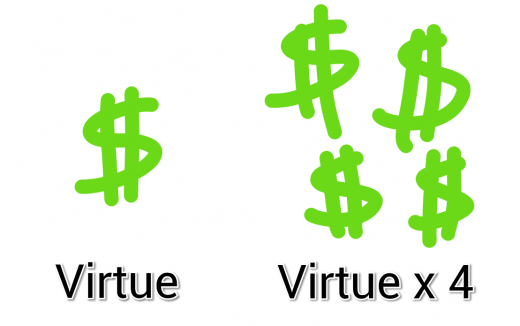 Any Honest Profession is Virtuous

I can make money by becoming an engineer. I can also be a teacher. I can be a janitor or I can be a brain surgeon. As long as there are people in the world who want or need the service I provide and/or the product my company produces, I am adding wealth in the world.

As long as money is made honestly (through open and consensual trade), it is a reward for being productive. For advancing society. For eliminating someone else’s wants and/or needs. What could be more virtuous than that?

It is not virtuous to sit on your butt and accept money from the government (also known as money taken from the producers) when you are mentally and physically capable of generating your own wealth. It is also not virtuous to obtain money by coercion, lying, theft, blackmail, government favors, or anything other than honest trade.

To produce is good. Therefore, to earn any amount of money via honest production is virtuous. The more money you make from what you produce, the more valuable your production has been to society.

Below you’ll find a quote from the classic novel Atlas Shrugged, with my own emphasis added:

So you think that money is the root of all evil? Have you ever asked what is the root of money? Money is a tool of exchange, which can’t exist unless there are goods produced and men able to produce them. Money is the material shape of the principle that men who wish to deal with one another must deal by trade and give value for value. Money is not the tool of the moochers, who claim your product by tears or of the looters, who take it from you by force. Money is made possible only by the men who produce. Is this what you consider evil?